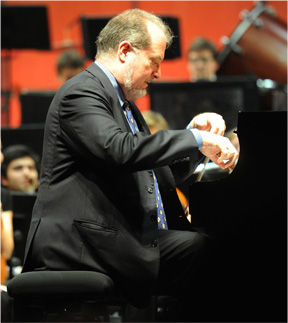 I’ve never been big hearing on single-composer recitals — in fact, I can count on Mordecai Brown’s pitching hand the number of truly great concerts I’ve heard in this specialized genre. But Beethoven is no ordinary composer and Garrick Ohlsson is a uniquely gifted pianist, so his recital last night before a good-sized audience at Walt Disney Concert Hall proved to be the outlier to my listening history.

When my late wife (a concert pianist) was planning recitals she would often program a Beethoven sonata and it was usually the centerpiece of the evening. During her short career (cut short by MS) she played three of the four sonatas that Ohlsson performed last night but never would have conceived of programming four in one evening. Ohlsson made it work magnificently.

However, so far as I can make out from his Web site, Ohlsson isn’t undertaking such a marathon He simply chose four of Beethoven’s best-known sonatas to make up this recital. All four have subtitles and all are in three movements (some of the composer’s efforts in this genre have four movements and a few have just two).

Dennis Bade, in his printed program essay, quoted Ohlsson as saying: “The great thing about the famous pieces of the repertoire is that they are famous because they are great! These sonata take no prisoners!” That, from Ohlsson’s perspective, was a good enough for his choices.

The Pathetique Sonata (Op. 11), which opened the evening, and the Moonlight (Op. 27, No. 2), which concluded the quartet were among Beethoven’s earlier efforts in this genre. The Appassionata (Op. 57) and Waldenstein (Op. 53) are from Beethoven’s middle period, and last night they formed the middle of a very tasty sandwich. Pathetique and Moonlight are the shortest of the four; thus the program formed a splendid arch.

Ohlsson is a joy to watch precisely because there is little to watch (compared to young pianist today, such as Yuja Wang and Lang Lang). He walks briskly on stage, sits quietly at the keyboard and plays magnificently. As I noted in my Hollywood Bowl review from this past summer, “There is a sense of serene calm to Ohlsson,” He emphasizes sonority in his bass notes and his right hand delivered pristine, pearly tones throughout the evening.

His Pathetique rendering was elegant, even in the stormy points, and Appassionata (which for most pianists would be the climax of the evening but here merely ended the first half) was appropriately passionate. The second half of the evening — featuring delicate swirling lines in Waldenstein and limpid serene pools in Moonlight — was even more satisfying than the pre-intermission performances.

In response to the thunderous standing ovation, Ohlsson announced he would play as an encore something that wasn’t Beethoven and needed no introduction: an exquisitely delicate performance of Debussy’s Clair du lune. The word breathtaking is often overused (including by me). In this case, it was exactly the appropriate description. What a gorgeous way to end the evening!