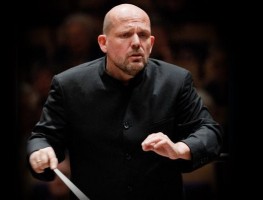 Jaap van Zweden (pictured left), who was in town this weekend to conduct the Los Angeles Philharmonic, has a reputation as an intense podium presence (the photos on his Web site play to that image).

The 56-year-old Amsterdam native has rocketed up the conducting ranks in recent years, first as music director of the Dallas Symphony and the Hong Kong Philharmonic and, beginning in 2018-2019 as leader of the New York Philharmonic. This was reportedly just the second time he has conducted the L.A. Phil — the last was in 2000.

His program this weekend at Walt Disney Concert Hall played to his strengths — the fifth symphonies of Beethoven and Shostakovich — and, consequently, the musical interpretations did not surprise, at all. However, his demeanor did reveal touches of humor that were a surprise, and the orchestra responded to everything he did with a superb performance.

In just a few rehearsals and two concerts (last night was the second of three this weekend), van Zweden took full advantage of Disney Hall’s ultra-live acoustics and the orchestra’s formidable skills. He seated all of the violins to the left of the podium and positioned the piano, celeste and two harps behind them. He put the violas to his right with the basses behind them and the cellos more or less in the middle.

From my seat in the Orchestra East section that made for a rich, sonorous string sound, and van Zweden — who before he became a conductor was the youngest concertmaster in the history of Amsterdam’s Royal Concertgebow Orchestra — reveled in the hall’s ability to elicit the softest of pianissimos from all string sections.

In his preconcert lecture, Eric Bromberger (who, among other things is a violinist) said he had never played or heard a program pairing Beethoven’s fifth with Shostakovich’s fifth. Neither have I and, perhaps, with good reason. It made for 80 minutes of intense music making with little respite — even the Largo movement of the Shostakovich was intense under Zweden’s leadership. The intensity translated to the musicians. Although Zweden occasionally cracked a smile, the orchestra never did.

Bromberger noted that both symphonies begin in darkness, end in triumph and conclude with the entire orchestra playing a single note. Beethoven’s Symphony No. 5 begins in C minor, concludes in C major and ends with a single “C”. Shostakovich’s Symphony No. 5 begins in D minor, concludes in D Major and ends with a single “D”. That provided some different ways to consider the two pieces, which are among their centuries’ best-known symphonies.

Perhaps the most unusual aspect were those final movements. Under van Zweden’s ministrations, both works were relentless in their overall concept, but while Beethoven’s fifth was as quick as I have ever heard it played, the Shostakovich was more deliberate than many other renditions I have heard.

Anyone watching and listening to van Zweden will inevitably wonder how his style will translate to the Big Apple when he takes over the NYPO — he becomes music director-designate next season when he conducts three sets of subscription concerts, plus the season-opening gala.

All of next year’s programs are in the “power mode” — the one unusual piece is the New York premiere of Philip Glass’ Concerto for Two Pianos and Orchestra, with Katia and Marielle Labèque as soloists. We don’t know how his style will play when he programs pieces outside of the power slot.

However, it’s even more fascinating to contemplate the leadership van Zweden will be able to exert in the renovation of the NYPO’s home, now called David Geffen Hall. A man who grew up playing in the Concertgebow and who has guest-conducted in many of the world’s great venues, including Disney Hall, will surely know what he wants and what the orchestra needs. How that translates into reality will be something to watch in future years.