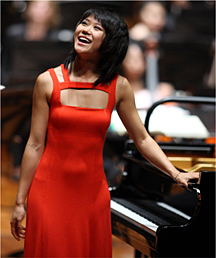 The London Symphony has been in the news lately for its announcement that Sir Simon Rattle will become the ensemble’s Music Director in September 2017 (LINK). Michael Tilson Thomas, one of orchestra’s former Principal Conductors (1988-1995), has continued his relationship with the orchestra as its Principal Guest Conductor, and brings the LSO to Walt Disney Concert Hall Tuesday night.

The concert, which is part of a cross-country U.S. tour that concludes Wednesday night in Santa Barbara, also celebrates Thomas’ 70th birthday. The Disney Hall program is Four Sea Interludes from Britten’s opera, Peter Grimes, Sibelius’ Symphony No. 2 and Gershwin’s Concerto in F with pianist Yuja Wang (pictured right) as soloist. In Santa Barbara, Shostakovich’s Symphony No. 5 replaces the Sibelius. Both are in the “don’t miss” category.