Music Director David Lockington’s decision to pair Tchaikovsky’s Symphony No. 6 with Rachmaninoff’s Piano Concerto No. 2 for today’s Pasadena Symphony concerts proved to be boffo box office as both concerts at Ambassador Auditorium were virtually sold out. Moreover, based on this afternoon’s first-rate performance, most of those new to the PSO (as well as regular attenders) should have gone home pleased.

Using what he called the Beethovian philosophy of darkness to light, Lockington elected to open the concert with the symphony and leave the concerto and its upbeat ending for after intermission.

For whatever reason, the orchestra’s playing in the symphony’s first movement seemed almost understated and, prior to the second movement, there was a pause to seat latecomers. Some day an orchestra will have the courage to insist that people who arrive well after the starting time wait until the first piece — not just the first movement — has concluded. After that long pause, the entire mood changed: the strings had more weight and the entire performance seemed more energized.

In his preconcert lecture and remarks to everyone before he began the performance, Lockington said — with a tone of resignation — that even if people applauded after the thunderous conclusion to the third movement, he and the orchestra would, in fact, play the concluding movement. Many people (of course) did applaud, and the orchestra did resume, finishing with impressive intensity. In a nice touch, Lockington not only asked principals stand to acknowledge the applause, he asked each section to stand, as well. 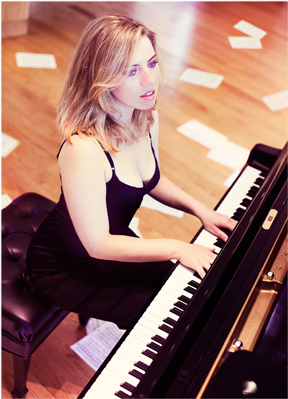 After intermission Natasha Paremski (pictured left), a 29-year-old Moscow native who now lives in New York City, displayed impressive technical prowess in her performance of Rachmaninoff’s second piano concerto. She also seemed occasionally to bring a hard edge to her tone, although this may have been more to do with the piano and wasn’t as apparent during her encore, one of Rachmaninoff’s Études-Tableaux.

In the preconcert lecture, Paremski said that in recent years she had gone back to scrutinize the score and from that examination had acquired a new interpretative slant to this familiar work. She and Lockington were not always in synch in the opening movement, as Paremski often seemed to leap slightly ahead of Lockington, but eventually they locked in together during the balance of the performance.

The second movement was the most impressive as Paremski delivered long, singing lines in the opening and closing parts of that section. Kudos, also, to Donald Foster, whose plaintive clarinet solos were a marvelous match for Paremski’s ruminations. Paremski then blazed through the final movement while Lockington and the orchestra hung on for dear life. Predictably — and deservedly — all forces earned a standing ovation.

Hemidemisemiquavers
• Prior to the concert, the Pasadena Symphony Women’s Association presented a check for $119,000 from its Holiday Look-in project to CEO Laura Unger.
• Paremski’s bio says she made her professional debut with the El Camino Youth Symphony in Palo Alto at the age of 8.
• Emulating Yuja Wang, Paremski was wearing bright red stiletto heels — I have no idea how she can pedal in them!
• Principal Guest Conductor Nicholas McGegan will lead the next concerts on March 18, a program of Mendelssohn’s Symphony No. 3 in A Minor (“Scottish”) and Mozart’s Violin Concerto No. 5 in A Major (“Turkish”) with Rachel Barton Fine as soloist. INFORMATION
• Season-ticket holders got a first look at the 2017-2018 season, which begins on Oct. 14 and concludes on April 28. Lockington will lead five of the six concerts (McGegan leads the other one) and the season will feature two world premieres, including one by a composer yet to be named that is a co-commission with the Huntington Library. Among the soloists will be violinist Dylana Jensen, who is also Lockington’s wife. More on the season in a later post.
________________________