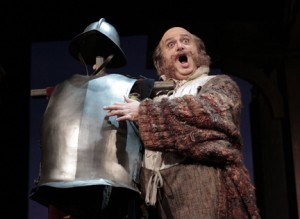 One of the hardest jobs for any opera company is to retire a beloved production for a new one. One has only to look at recent events at New York City’s Metropolitan Opera to realize how fraught with peril such a change can be.

For its opening production in 2009, the Met retired a beloved (by most) 20-year-old Franco Zeffirelli production of Tosca that was a sumptuous, literal recreation of Puccini’s concept. In its place went a stark, symbolized rendering by Swiss director Luc Bondy. The headline for Alex Ross’ review in “The New Yorker” of that opening night summed up many people’s feelings: “Fiasco.” Time has softened attitudes only slightly.

Likewise, when the Met replaced its decades-old, literal production of Wagner’s Ring cycle with a quirky new one by Robert Lepage, the results were even more disastrous, to say nothing of far more expensive.

So it must be with a bit of baited breath that Los Angeles Opera introduced a new production of Verdi’s Falstaff last night in the Dorothy Chandler Pavilion in the first of six performances with others occurring through Dec. 1. There will also be a concert performance on Nov. 26 at the Renée and Henry Segerstrom Concert Hall in Costa Mesa.

The production of Verdi’s final opera — based on Shakespeare’s play, The Merry Wives of Windsor — is being directed by Lee Blakeley, with scenery and costumes designed by Adrian Linford; both are making their LA Opera debuts. Rick Fisher is the lighting designer and Nicola Bowie is the choreographer.

This replaces an historic production that originated not with LA Opera but with the Los Angeles Philharmonic in 1982. What made that production special was that the Phil’s Music Director, Carlo Maria Giulini, was conducting the opera, something that he had not done for 14 years.

Donal Henahan the New York Times music critic wrote of that night, “For one golden moment, at least, this opera-starved city has become the center of the opera universe.” LA Opera took over the production and revived it three over the succeeding decades.

However in this bicennial year of Verdi’s birth LAO General Director Plácido Domingo and Music Director James Conlon elected to mount an entirely new effort. Conlon will conduct all six Los Angeles performances and the concert performance in Orange County.

Italian baritone Roberto Frontali will appear in the title role as Falstaff, along with soprano Carmen Giannattasio as Alice Ford and Marco Caria as Ford. Other cast members are Ronnita Nicole Miller and Erica Brookhyser, alumnae of LA Opera’s young artist program, as Mistress Quickly and as Meg Page; tenor Robert Brubaker as Dr. Caius.
_____________________