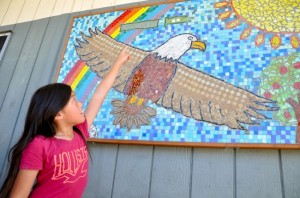 The eagle has landed at Evergreen Elementary School. A beautiful tile mosaic of a soaring eagle, the school’s mascot, was unveiled during an assembly in May.  For 20 weeks, eight Special Education students worked with artist Robin Bott.

“All the students really loved creating the mosaic and were really excited to unveil it. The collaboration and teamwork they displayed was amazing,” said teacher Ashley Marshman.

The creative project was made possible through the Accessible Arts grant through the office of L.A. County Supervisor Don Knabe.  Several months ago, a school-wide contest was held to create the mural design.

Third grade student Elim Jiang was named the winner. She received a certificate of recognition during the assembly. The 4-foot-by 3-foot mural depicts an eagle soaring above the clouds and through a rainbow. A golden sun shines over an apple tree.

Jiang said her favorite part was the plane with an Evergreen banner flying above the eagle. Bott leads hands-on art projects with students throughout the county.

“First, the class started with paper mosaics and drew some eagles,” she said. Then the class selected one of the drawings submitted for the contest. “And it was so hard to choose because they were all so beautiful!” she said.

Bott then transferred the winning design onto the panel. Her artist father built the frame. And Bott cut hundreds of the colorful tiles.

“And then we started tiling!” she said.

First, students outlined the design with small tiles; then they used larger tiles to fill it in using a water-based glue. Student representatives from several classes also glued pieces of the tile mosaic.

“It has been such a joy to see the mosaic slowly coming to life as students worked diligently and cooperatively on it.  Now it serves as a wonderful vision to everyone that our Evergreen Eagles SOAR!  Evergreen was one of only 13 schools in the state to be named a California Exemplary Arts Distinguished School, and this mosaic project is one of many examples of the beautiful and creative activities that our dedicated staff provide for all our students,” Principal Carolyn Wills said.

The tykes are just finishing their first year in the new Spanish immersion program in the Hacienda La Puente Unified School District. In addition to their ABCs and numbers, these 5-year-olds learned Spanish.

“My son Daniel didn’t speak a word of Spanish when he started,” said parent Daniel Caccam. “And he just won third place in the Spanish spelling bee.”

The proud parent said his son really likes the Spanish immersion class. They’ll continue next year as the school district adds Spanish to a first grade in both schools.

“We use a 90/10 formula, with the class instruction in Spanish 90 percent of the time and 10 percent in English,” explained Valinda Principal Elizabeth Bermejo.

Every year, English is gradually increased until instructional time reaches half English and half Spanish in the fourth through sixth grades.

“He loves the Spanish class, now we even watch the news in Spanish,” said the happy mother, who plans to also enroll her 4-year-old daughter Emily in the dual immersion program.

Los Altos Principal Rosie Sinapi thinks so much of the program, that’s she has enrolled her own daughter in the Spanish class.

The parents’ enthusiasm encouraged school board members Gino Kwok and Jay Chen. Kwok experienced some resistance from parents at first about the Spanish immersion class.

Less than a week after her fellow Mt. San Antonio College trustees condemned her for holding two overlapping offices, Laura Santos appeared before a Baldwin Park committee to convince them to back a Mt. SAC satellite campus on a property owned by the second board she sits on.

The proposal removes all doubt about incompatibility between her dual elected positions on Bassett Unified and Mt. SAC boards, said Doug Johnson, a fellow at Claremont McKenna College’s Rose Institute of State and Local Government.

“It makes it very concrete that there is a shared interest in the decision,” Johnson said. “She’s actually convicted herself.”

In California, an official may not hold two elected positions if there exists even a potential for a “significant clash of duties.”

“By promoting that agreement between these two districts, she has removed any question,” Johnson said.

Santos previously received legal opinions from both of her districts telling her she must resign from Bassett, but has refused to resign before June 30. The former lawyer receives monthly stipends from both organizations.

At the meeting of Baldwin Park’s 2+2+2 Committee, Santos handed out bullet-pointed documents listing the benefits of the Florence Flanner School, an under-used property Santos want to use to generate revenue for the small Bassett school district. Santos also shared building diagrams with the public committee, which includes members of the Baldwin Park City Council, Baldwin Park Unified School District and the Valley County Water District.

“It’s been a phenomenal run this year, and this is a great team that has put in a lot of hard work to achieve this,” said Mt. SAC Flying Team Advisor and Aeronautics Professor Robert Rogus.

“There’s a million people to thank – this has been a big team effort during the past several weeks,” said Assistant Superintendent of Educational Services Matthew Witmer. “And here we are, I’m very happy to see everyone today!”

Staff members gathered in the gymnasium for the welcome and keynote address.

Taylor said the professional development day would also provide the opportunity for employees to reconnect with friends they don’t get a chance to see every day.  The morning kicked off with keynote speaker Dr. Greg Washington, Dean of the UC Irvine Henry Samueli School of Engineering.

Over 75 breakout sessions followed with a wide-variety of offerings focusing on Common Core State Standards, technology, college and career readiness, and more.  A large percentage of the presenters were WVUSD staff members.

Employees around the District gave the professional development day a resounding “thumbs up.”

“It was great to be able to spend the day reconnecting with our colleagues from other schools and learning from our peers,” said Helen Papadopoulos, Suzanne Middle School Math and Drama Teacher.

“I thought it was a great day to learn so some new skills and tools to take back to my school.  It was extremely well organized and I thought the keynote speaker was very engaging,” said Peggy Laine, Maple Hill Elementary Library Media Technician.

A three-step process determined the Best High Schools. The first two steps ensured that the schools serve all of their students well, using performance on state proficiency tests as the benchmarks.

For those schools that made it past the first two steps, a third step assessed the degree to which schools prepare students for college-level work.

Los Altos High School welcomed 443 new graduates Friday night in Hacienda Heights. The proud Hacienda La Puente Unified grads paraded down the aisle at the high school gym on a warm summer evening. The commencement exercises were one of the first in the San Gabriel Valley.

Check out the highlights at GRADS.

More than 233 graduates walked down the aisle during commencement ceremonies for Workman High School on Friday in Industry. Graduation exercises were held at the Industry Expo Center. The commencements begin a busy season of graduations for area high schools.

Check out the storify at WORKMAN.

Layton said his resignation is not related to a letter obtained by this publication and sent to the CIF-Southern Section last week by Diamond Bar that alleges Diamond Ranch coaches obtained Diamond Bar’s account information on Hudl and used video archives and notes to help prepare for the game.

Diamond Ranch won the game 34-20, but the night was marred by a benches-clearing brawl that led to the suspensions of several players from both teams. Diamond Bar forfeited its following game because it could not field a team. Diamond Ranch went on to win the league with a 6-0 record.

CIF-SS informed Diamond Bar the hacking accusations are a league matter. Hacienda League principals are expected to discuss the situation in a regularly scheduled meeting this week.

In the letter, Diamond Bar documents a steep rise in clicks or hits on its Hudl page the week of the game. Hudl.com has become a popular resource for coaches who can store game video, practice video and notes for game preparation. According to the letter, a former Diamond Ranch coach came forward to Ryan Maine, Diamond Bar’s head coach at the time, about the hacking.

Forget Doogie Howser, these real-life teens were transplanting organs in preserved pigs as part of their final exam in anatomy and physiology at Los Altos High School.

The pressure was on as six surgical teams took turns performing kidney, heart and lung transplants. They only had 90 minutes to save their patients on Tuesday.

Meanwhile, a second surgical team was experiencing a rapid rise in their pig’s heart rate. Once again, the young surgeons had to decide which drug to administer.

“We have a special program for their tablets that allows me to introduce emergency situations during their operations,” explained teacher Sean Kane, chairman of the science department.

The tablets simulated the EKG and other medical monitors found in a real hospital. But any mistakes the young doctors made wouldn’t be fatal.