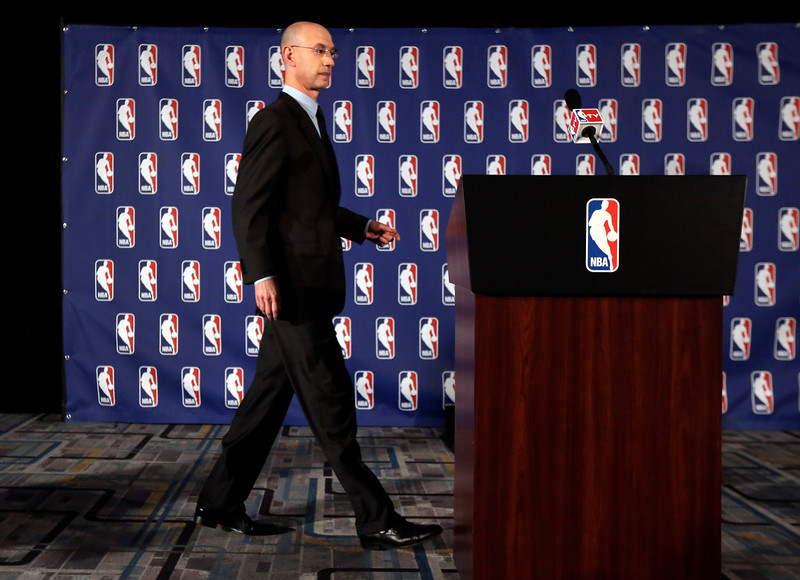 NBA Commissioner Adam Silver walks to the podium at news conference in New York, Tuesday, April 29, 2014. Silver announced that he is banning Los Angeles Clipper owner Donald Sterling for life from the Clippers organization, in response to racist comments the league says he made in an audio recording. (AP Photo/Richard Drew)

Below is a select Q&A with USC law professor Jody Armour and USC law & business professor Michael Chasalow surrounding the NBA’s step in both finding an ownership group to replace Donald Sterling and the potential legal challenges ahead:

How do you think the process in finding a new owner panning out?

Armour: Sterling bought the franchise for virtually nothing and it has increased. It’s gone up in value exponentially since he initially purchased it and it has great players with Chris Paul and Blake Griffin and is a playoff contender and in Southern California in a metropolitan and media hub. I’m thinking upwards of $700-800 million. But if they make a run in the playoffs, more folks could see this as an opportunity not just to get a great team, but to get a great team that has a certain cache and certain amount of public attention focused on it. The new owner can come in and say he has a new vision and spark a lot of goodwill that comes from that kind of story. I think it could be very valuable. If you get a bidding war going, what determines value is markets. It could break the billion mark if you had folks who saw something that is beyond a fixer upper. It’s in move-in condition, not quite mint condition, but move-in condition with a high upside with profit potential.

Chasalow: It remains to be seen how it’s going to evolve. Everybody expects the team will be sold in the short term or long term. But the big question is what will bring that about. Will it actually be an owner’s vote or pressures brought to bear on Sterling? At a minimum, the team is worth much more being sold than it is in his hands. Forbes valued it at $575 million, but it’s probably worth a lot. Any sale would maximize that value with an auction or bidding process so they’re getting top dollar for it.

Do you expect Donald Sterling to fight this issue through litigation?

Armour:  He doesn’t have a lot to lose by putting up a legal fight. This team has been a central part of his life for many years and one of the longest standing owners in the NBA and is in his sunset years and might want to go on with his boots on and not sitting in the corner with a retirement home, but in the fray. If he thinks he is being relieved of his property for unjustified reasons, such as his own private thoughts and expressions, he might try to be come a crusader and martyr for privacy rights. With the current-day concerns about the NSA intrusions into ordinary citizens’ privacy, there are a lot of folks who believe privacy rights are valuable and they may believe people deserve some protection of them.

Chasalow: The league is on pretty solid footing and the footing is going to be contractual. Assuming Sterling has given them the right to take action against him, and it seems they have, they have contract rights to do so. The only limit with that is whether the league did not act in good faith in enforcing their rights. That’s impossible to prove given he started the whole thing with his outrageous comments. Assuming there is a contractual right to act, he would have to show it was in bad faith. I don’t think he’s able todo that.

Assuming the owners vote to have him sell the team, he could have a claim against them. That could be shakier on if the owners have the right to sell for any reasons. There is also a question on who owns the team. I’m not clear if it was owned by him personally or by him and his wife and a family trust and if he removes himself from that, would the sanctions levied against him personally be extended to his family? Not withstanding all of that, I still think the franchise becomes worth a lot more in someone else’s hands than in his or his family’s hands. That would provide an incentive to sale.

As offensive as Sterling’s comments were on the tape, does he have any legal grounds to fight any privacy concerns about being recorded and having a private conversation leaked to the public?

Armour: Donald Sterling is himself a lawyer and knows his legal rights. He’ll own up on them and will say it cannot be a ground of suspension that someone utters words in private to a confidant and for those privacy uttered words and thoughts, his property is taken away from it. That will be his argument. It’s an intuitively, plausible and very compelling argument. He’s not being sanctioned for anything he’s done with any discriminatory deeds. He’s being sanctioned for words he uttered that could be considered criminally and illegally recorded and broadcast without his consent.

Chasalow: To the extent it was done inappropriately, there could be a claim against the girlfriend who’s suspected of leaking the information. Once the information is public, the league can act on information that is out there. They are not a government body and judicial body. They’re just saying that information that has come to light to the public is creating a problem, and that’s not in the best interest of basketball. They’re justified in taking action. Even if the recordings were illegally made, that doesn’t prevent from the league of taking action.

How long do you think this process will take place in the Clippers finding a new owner and the NBA sorting out any litigation concerns?

Armour: It’s all going to depend on what’s most important to Donald Sterling. Is it profit? Is it control over a team that he’s had for years? Is it principle? It all depends on the narrative he comes up with what has happened to him and who he is. He can be a hero in the certain kind of narrative of a person whose privacy is wrongfully violated. Then he could paint himself as a martyr and crusader and not a morally odious person.

Chasalow: I don’t know. There’s too many variables to determine that. It really depends on Sterling and his motivation to sell. It might depend on what offers he’s presented with. It doesn’t need to be a long process, but if he wanted to draw it out, there’s a lot of things he can do to extend the process for quite some time. Any of those would diminish the value of the team. So that might not be the best business move. There may be emotional reasons for taking protracted litigation. He could not go along with the sale. He could try to transfer the sale to a family member. I don’t know if there is justification for filing through bankruptcy, but Frank McCourt brought a bankruptcy court that delayed things. We live in a world where courts slow things down. Even if you don’t have a justified claim, taking some action could still delay a sale of the team.

Donald Sterling scandal: NBA to hold meeting on Thursday to detail next step