1. Player of the game:  Blake Griffin. The Clippers forward made giant leaps of mankind with three thunderous dunks. They also marked giant leaps surrounding Griffin’s integration back into the lineup after missing 47 games with various injuries. Griffin posted 19 points on 5-of-10 shooting, a 9-of-12 mark from the foul line, 12 rebounds and six assists in 32 minutes by showcasing his athleticism that he had before his injuries.

He threw down a two-handed dunks over Portland center Masons Plumlee. Griffin followed that up with a two-handed jam that put Plumlee on another poster. And Griffin swatted shots away from Plumlee and Ed Davis. All in all, it marked a huge step for Griffin after averaging only 10.4 points on 40 percent shooting, 6.8 rebounds and 4.6 assists in the five games he played since his injuries.

2. Stat of the game: 39.8. That marked the field-goal percentage Portland shot against the Clippers. The Clippers ensured such numbers by forcing anyone not named Damian Lillard to beat them. Lillard scored 21 points on only 7-of-17 shooting, while getting roughed up through whistles and non-calls. Meanwhile, Lillard’s teammates shot a collective 26-of-66 from the field.

3. Turning point: The Clippers closed out the final 4:41 of the first half with an 11-2 run. While Clippers guard Chris Paul scored eight of those points during that stretch, Portland went only 1-of-11 from the field. The Clippers maintained their lead the rest of the way.
END_OF_DOCUMENT_TOKEN_TO_BE_REPLACED 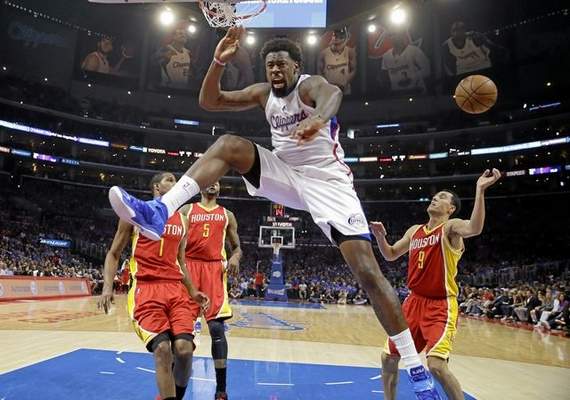 The NBA fined the Clippers on Tuesday $25,000 for violating anti-circumvention rules during their pursuit to retain DeAndre Jordan. (AP Photo/Jae C. Hong, File)

It turns out the Dallas Mavericks are not the only party that became unhappy with the DeAndre Jordan free agency sweepstakes.

The NBA announced on Tuesday that it fined the Clippers $250,000 for violating rules that prohibit teams from offering players unauthorized business or investment opportunities. The league alleged that the Clippers’ presentation to Jordan on July 2 included a potential third-party endorsement opportunity.

The NBA determined in its investigation that this aspect of the Clippers’ presentation had no impact on Jordan’s decision to re-sign with the Clippers. But that did not stop the NBA from issuing a fine. The NBA’s anti-circumvention rules prohibits teams from providing any compensation for a player unless it is included in the player’s contract.

The specifics regarding the Clippers’ third-party endorsement opportunity isn’t entirely clear. But an NBA source familiar with the teams said the Clippers presented a “hypothetical deal” that was nearly worth the amount of the league’s $250,000. Since then, the NBA source said Jordan did not take advantage of any possible endorsement opportunity.

Jordan had initially given the Mavericks a verbal commitment to sign with them. But he changed his mind a few days before the NBA moratorium lifted, giving Jordan the legal right to reconsider his options. That then spurred the Clippers to arrange a last-minute meeting at Jordan’s residence in Houston the day before the NBA moratorium ended on July 9, which marked the first day free agents can sign a contract with a team. 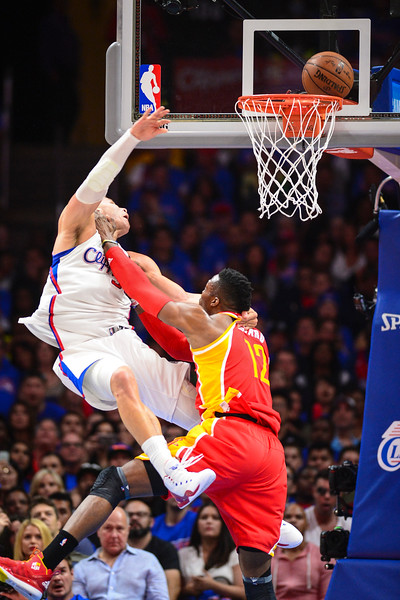 “Rockets Dwight Howard makes a hard foul on Clippers Blake Griffin during second half action at Staples Center Sunday, May 10, 2015. Clippers defeated the Rockets 128-95 to go up 3-1 in the series. ( Photo by David Crane/Los Angeles Daily News ) “

The lack of touches bothered Dwight Howard. The physical play irked him, too. The frustration over an eventual double-digit playoff loss escalated enough to show something far from what his team expected from him as the NBA’s most athletic and dominant center.

He failed to produce on either end of the floor. He committed silly fouls. He then walked through the entrance tunnel in shame before the loss became official.

The Lakers, Kobe Bryant and their passionate fanbase remember these images well, Howard’s last game in a purple and gold uniform two years ago ending with an ejection well before the San Antonio Spurs swept the Lakers in a forgettable first-round series. Yet, nearly the same scene played out again for Howard wearing a Houston Rockets uniform as they suffered a 128-95 Game 4 loss of their Western Conference semifinals series to the Clippers on Sunday at Staples Center.

The Rockets pledged they would feature Howard more on offense in Game 4 after he only had three second-half field-goal attempts in a Game 3 loss. Instead, Howard recorded nearly as many fouls (six) as points (seven) and rebounds (six) as the Clippers took a 3-1 lead with a chance to close out the series in Houston on Tuesday and advance to the Western Conference Finals for the first time in franchise history.

“We were able to take him out of the game mentally,” Clippers forward Matt Barnes boasted afterwards. “They need him on the floor to be able to win.”
END_OF_DOCUMENT_TOKEN_TO_BE_REPLACED 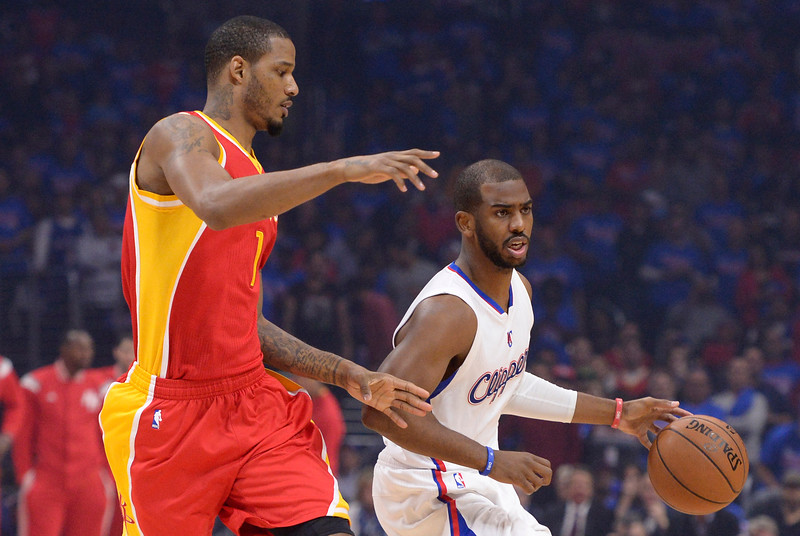 “Clippers#3 Chris Paul drives around Rockets#1 Trevor Ariza in the first quarter. The Los Angeles Clippers played the Houston Rockets in the game 3 of the second round of the NBA iWestern Conference Playoffs. Los Angeles, CA 5/8/2015 (Photo by John McCoy Daily News)”

A week has passed since Clippers guard Chris Paul strained his left hamstring, and Clippers coach Doc Rivers expects the injury will last much longer. Possibly until June, assuming the Clippers are still playing.

“You know it will be with him through the playoffs,” Rivers said before the Clippers hosted Game 4 of the Western Conference semifinals against Houston Rockets at Staples Center. “We’re going to have to monitor this throughout. It’s never going to go away. Once they start, it doesn’t go away. We have to feel careful.”

Paul will play in Game 4 after posting 12 points on 5-of-12 shooting and seven assists through 23 minutes in a Game 3 victory over Houston on Friday that gave the Clippers a 2-1 series lead. That happened after Paul sat in the first two games in Houston. Yet, Rivers said he and Clippers trainer Jason Powell have not concluded how they will handle his workload in Game 4.

“He’s more confident,” Rivers said of Paul. “That helps. I know he feels better than he did two days ago. That should help. I’m not sure if we are going to increase minutes or not yet.” 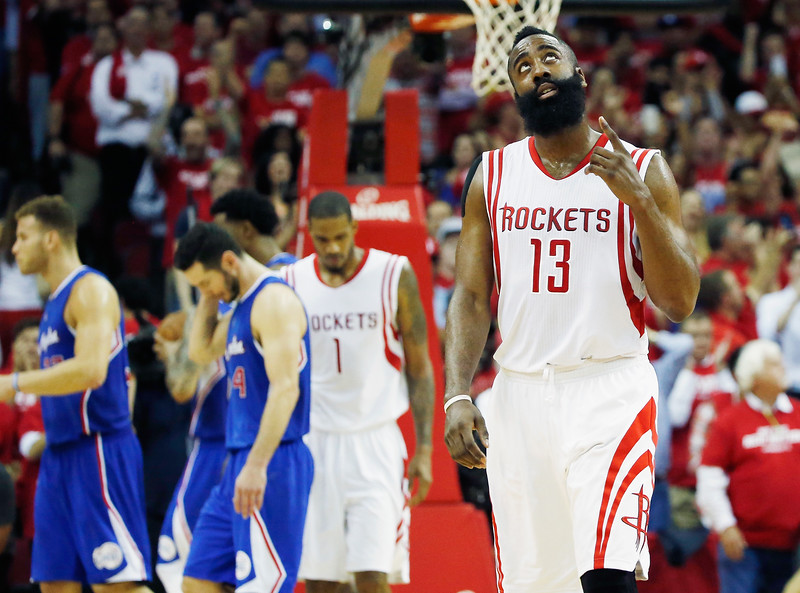 “HOUSTON, TX – MAY 06: James Harden #13 of the Houston Rockets walks across the court late in the second half against the Los Angeles Clippers during Game Two in the Western Conference Semifinals of the 2015 NBA Playoffs on May 6, 2015 at the Toyota Center in Houston, Texas. NOTE TO USER: User expressly acknowledges and agrees that, by downloading and/or using this photograph, user is consenting to the terms and conditions of the Getty Images License Agreement. (Photo by Scott Halleran/Getty Images)”

The implications have more than just how the Clippers break a 1-1 tie when they host the Rockets in Game 3 of Western Conference semifinals on Friday at Staples Center. Or how the Clippers will stop Harden, the NBA’s runner-up MVP averaging 27.4 points on 44 percent shooting and 7.0 assists thus far in the postseason. Harden hardly sounded pleased that Barnes talked trash with his mother during the Clippers’ Game 2 loss on Wednesday.

“Any situation where you’re talking about somebody else’s parents, that’s just disrespectful,” Harden said after the Rockets’ morning shootaround at Staples Center. “I’m focused on Game 3 and we’re very focused and locked in. There will be some great intensity tonight.”

Barnes has since said he apologized Harden’s mom, explaining he thought he was just arguing with another fan. This happened shortly after Barnes picked up a technical foul for bumping in Harden. His mother, Monja Willis, since told TMZ that she accepted Barnes’ apology.

Does all of this resolve the issue?

“I’m not focused on that,” Harden said. “I’m focused on Game 3. We’re going to go out there, compete and try to get a victory on the road.”
END_OF_DOCUMENT_TOKEN_TO_BE_REPLACED 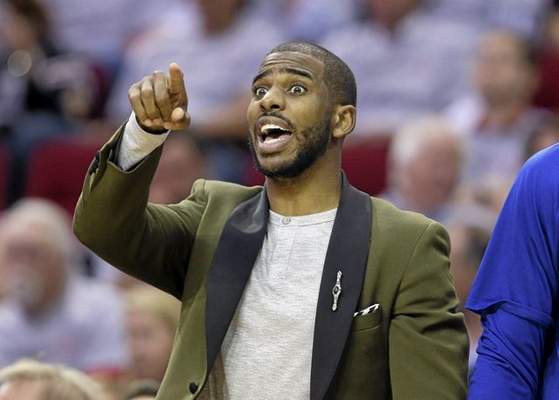 Los Angeles Clippers’ Chris Paul signals from the sidelines during the first half of Game 1 in a second-round NBA basketball playoff series against the Houston Rockets, Monday, May 4, 2015, in Houston. Chris Paul is out for game 1 with a strained left hamstring. (AP Photo/David J. Phillip)

Less than a week ago, Chris Paul left a lasting impression by securing a first-round series on a game-winning bank shot while hobbling a strained left hamstring.

Since then, the only images of Paul has entailed sitting on the Clippers’ bench in dapper clothing, while mentoring his teammates. Behind the scenes, however, Paul has furiously worked to heal his hamstring so he can help the Clippers break a 1-1 series tie when they host the Houston Rockets for Game 3 on Friday at Staples Center.

“I think everything is going well,” Clippers coach Doc Rivers said Thursday on a conference call. “But we still don’t know anything about tomorrow yet.”
END_OF_DOCUMENT_TOKEN_TO_BE_REPLACED