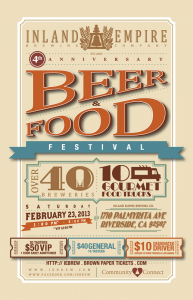 Let’s start with the numbers. A staggering 26 Inland Empire brewers will be represented at the event.

Add to that a baker’s dozen of brewers from outside the I.E.

And on top of that, add ten food trucks and four bands.

What do you get? One heck of a party!

Tickets for the shindig are available now in three categories:

All tickets include entertainment and access to the food trucks.