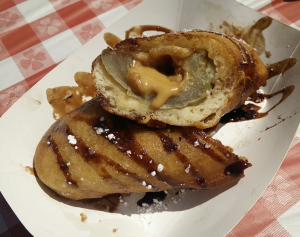 Just when you think you’ve tasted it all, they come up with something new.

How does a deep-fried peanut butter pickle grab ya?

Then how about a spicy peanut butter and jelly burger, complete with bacon and Sriracha? 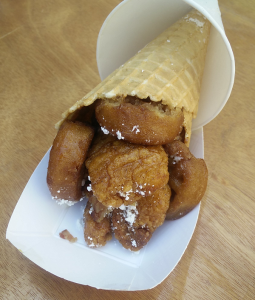 Those are just two of the 1,400 food items available at this year’s Los Angeles County Fair, which opens Friday and runs through September 27.

So many items, in fact, that you could eat three meals a day at the fair for 3½ years and not eat the same thing twice, according to fair officials.

The fine folks at the fair hosted a food preview today for members of the media, featuring a small sample of those 1,000-plus delicacies.

Here are some of the things you can look forward to: 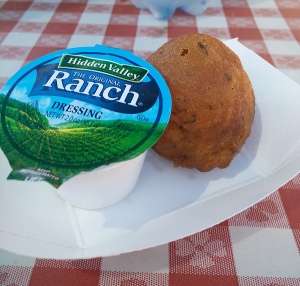 Let’s start with Chicken Charlie’s. Chef Charlie Boghosian has been frying various edibles — everything from frogs’ legs to Klondike bars — at the Los Angeles County Fair (and elsewhere) for nearly two decades.

Every year, Boghosian comes up with new “totally fried” creations, and this year is no exception. Along with the aforementioned peanut butter pickle and the seemingly-contradictory deep-fried SlimFast Bar — both new this year — two items are making their debut at the Los Angeles County Fair: Deep-fried guacamole and deep-fried bacon-wrapped chicken and waffles.

I tried the deep-fried guacamole at the preview event and, while it was good, I thought the flavor was somewhere between Mediterranean and Mexican, with kind of a falafel vibe to it. However, I also heard he’s still tweaking the recipe, so come Friday, I’m hoping the flavor needle swings back toward Mexico.

I didn’t try the peanut butter pickle, but it received mixed reviews from those who did. Some liked it a lot. With others, one bite was more than enough. 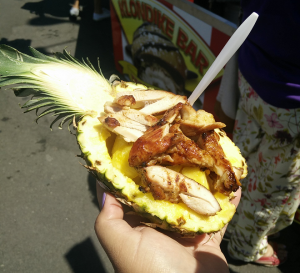 It’s not all about the fryer, however. Chicken Charlie’s also serves healthier options, such as grilled chicken, pineapple and rice, served in a hollowed-out pineapple half.

Gussied-up burgers were also part of the preview event, and I tried two good ones. 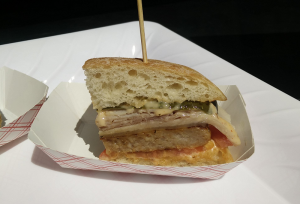 I also enjoyed the spicy peanut butter and jelly burger from Cornucopia Foods, which operates several food stands at the fair. The burger was packed with smoky bacon flavor and had a spicy Sriracha kick. My mouth was burning for quite a while after eating it.

Cornucopia Foods also featured a finger-food version of chicken and waffles, served in a large waffle cone. Look for it at the Wing Stand. 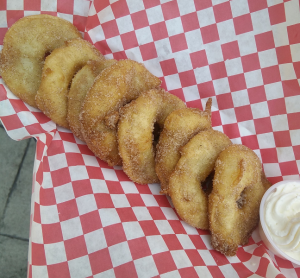 For dessert, I tried a deep-fried cinnamon apple ring from the Chuckwagon. It was good, but there are a couple of caveats. The apple flavor gets a little lost in the batter, and the texture is more donut than potato chip. So if you dive into it thinking apple pancake, you’ll have a better experience.

Pink’s is back at the fair this year, with more than just their world-famous hot dogs. I tried their chili cheese bacon pastrami fries. Meaty. Cheesy. Greasy. Delicious. 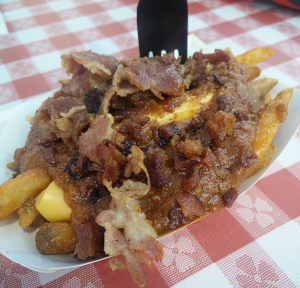 There were a few things we didn’t get to sample at the preview event that we’ll be sure to track down once the fair opens, including bacon-wrapped pork belly (served on a stick, naturally) and Frosted Flake fried chicken.

Others, like the Koolickle (a Kool-Aid-infused pickle), we’ll leave for others to grub on.

And that’s just the tip of the iceberg.

Whatever you’re hungry for, from healthy to decadent, salty to sweet, barbecued to deep-fried, I’m pretty sure you’ll be able to find it at the fair.

More photos can be found here and here and on our Instagram page here.