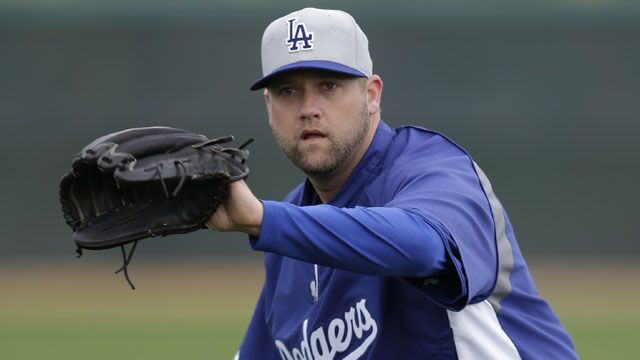 Matt Palmer will have surgery tomorrow in Arizona to repair a torn meniscus in his left knee. The team originally announced that he would miss six to eight weeks, but Palmer gave a more optimistic, more detailed timetable Monday.

“They say I can throw in two weeks, throw off a mound in three-and-a-half to four,” he said. “I could be back (in a game) by six weeks.”

Unfortunately for Palmer that won’t come in a major-league game. He was reassigned to the Dodgers’ minor-league camp, and Matt Magill and Steve Ames were optioned. All three pitchers will switch to the minor-league side, but the difference in assignments is key. Palmer isn’t on the Dodgers’ 40-man roster. Ames and Magill are, so they have now used up one of their three “option years” allotted under the Collective Bargaining Agreement.

Ames was touched for five hits and two runs in 2 2/3 innings. He walked none and struck out two. Magill’s first spring training on a 40-man roster could not have gone much better. The Simi Valley product did not allow an earned run in four innings, walked one and struck out eight.