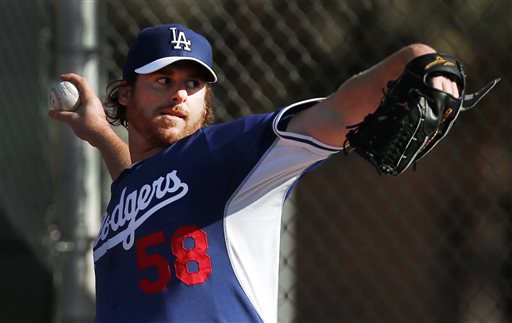 Chad Billingsley threw a curveball Sunday and heard — and felt — a crack in his right elbow.

“When you crack your back or your neck, that’s kind of what it felt like,” he said.

Billingsley motioned for a trainer and left the game immediately. He was supposed to throw two innings in his first rehabilitation start for Single-A Rancho Cucamonga and fell two outs short of the goal.

The 29-year-old pitcher, who is recovering from Tommy John surgery on his right elbow last April, was worried. “I threw a curveball and thought ‘oh my God.'”

After meeting with team physician Dr. Neal ElAttrache, Billingsley was reassured that the sensation was caused by scar tissue breaking up, a normal part of the recovery process. The doctor didn’t even send Billingsley in for an MRI exam.

Tuesday, Billingsley was back in the Dodgers clubhouse. He still hasn’t been cleared for his next bullpen session or rehab start but doesn’t think it will be long.

The original schedule called for Billingsley to make five rehab starts. That hasn’t changed, but a potential return in early May is on hold for now.

“Whenever he gives me the OK, I’ll start back up,” he said.