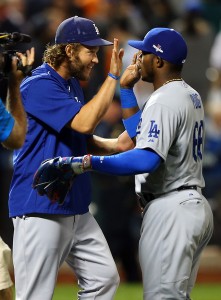 What made it particularly revealing: It came from inside the Dodgers’ clubhouse.

When Cusumano noted that pitcher Clayton Kershaw is the Dodgers’ highest-paid player, Van Slyke replied, “I didn’t say his name.”

Van Slyke once had a radio show in St. Louis himself. After leaving the Detroit Tigers’ coaching staff, he served as the first base coach for the Seattle Mariners from 2014-15. He was recently let go when new general manager Jerry Dipoto cleaned house.

Maybe the only thing that qualifies Van Slyke to discuss Puig: His son is Dodgers outfielder/first baseman Scott Van Slyke, who is close with Kershaw.

Regardless of whether either Van Slyke repeated Kershaw’s comments word-for-word, it’s no secret that Puig hasn’t always been popular with his teammates.

Still, to this point in the off-season, Puig had been able to avoid the rumor mill. Dodgers president of baseball operations Andrew Friedman recently said he was optimistic Puig could bounce back from an injury-plagued 2015 season, though the team has asked the outfielder to lose pounds from his listed weight of 255.

For all his perceived faults, Puig simply hasn’t been the focus of many trade rumors since he broke into the league. His potential and affordable contract have endeared him to the front office, while his electrifying style of play has endeared him to fans.

Knowing there is — and has been — pressure from at least one clubhouse leader to trade Puig, it’ll be a bit less surprising now if that happens in the coming months.

You can hear the full context of Van Slyke’s comments here.