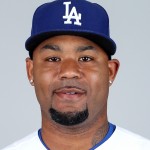 The Dodgers formally released Carl Crawford on Monday after the veteran outfielder cleared waivers. Crawford is free to sign with any team, though the Dodgers are on the hook for the remainder of his contract — the pro-rated amount of $20.75 million this season (roughly $13 million) and another $21 million in 2017.

Crawford, 34, slashed .185/.230/.235 in 87 plate appearances this season. He was designated for assignment June 5, the second high-priced contract the Dodgers have eaten in as many weeks. Alex Guerrero, who didn’t play an inning in the major leagues this season, remains a free agent.

Crawford was acquired along with Adrian Gonzalez, Josh Beckett and Nick Punto on Aug. 25, 2012, in what remains the largest trade (by money) in franchise history. Only Gonzalez remains on the Dodgers’ roster.

Kiké Hernandez slides into home plate for one of the Dodgers’ 12 runs Sunday against the Atlanta Braves. (Getty Images)

Carl Crawford was designated for assignment, an expensive concession that the 34-year-old left fielder no longer had the skills needed to help the Dodgers.

CHICAGO — Greetings from the Windy City and Happy Memorial Day.

END_OF_DOCUMENT_TOKEN_TO_BE_REPLACED

The last time Carl Crawford faced Noah Syndergaard, he went 0-for-3 with a double play groundout. None of the three outs left the infield.

It wasn’t the first (or the last) 0-fer of Crawford’s career, but it came in Game 2 of last year’s National League Division Series. Those were Crawford’s only career plate appearances against Syndergaard, who starts tonight for the Mets.

Crawford owns a .190/.222/.286 slash line this season, while his de facto platoon partner, Trayce Thompson, has home runs in consecutive games. Seems like an opportune time for night off, right? Dave Roberts chimed in on Crawford’s hitting and how he plans to use the 34-year-old outfielder: 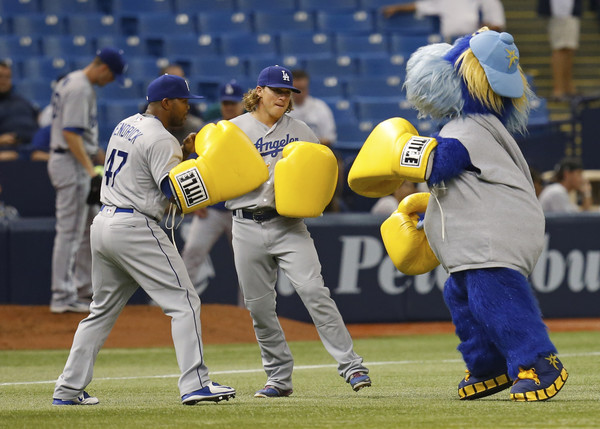 When he wasn’t fighting mascots in St. Petersburg, Kiké Hernandez (center) was attending to strange noises in his hotel room. (Getty Images)

ST. PETERSBURG, Fla. — A haunted hotel occupies the postage stamp-sized downtown of this, the 79th largest-city in America. More remarkably, so does the home stadium of a Major League Baseball team.

Teams visiting St. Petersburg to play the Tampa Bay Rays have many options when choosing a hotel in the area, and they often pick the haunted one.

The Vinoy Hotel was built in 1925. It expanded in 1992 to include a picturesque tower, which is not haunted by all accounts. Depending on where you stay, then, your visit to the Vinoy might not be very eventful.