Queen Tryouts Are Coming Up!

Trying out? please call us at 626-590-1134 and we will answer your questions and give you tips. Open to everyone and we mean it! All are encouraged to dress randomly even if you are coming to watch.

HOW? The first 20 Queen Hopefuls to arrive get in FREE (1 admission per Queen’s entourage). Each Queen Hopeful will have a few minutes to WOW the Judges. Microphone and boom box, even drumroll, provided. Be ready to show us and tell us why YOU should be Queen! Bring Loyal Followers and HUMOR!

Entry Forms and information to be found on the website: www.pasadenadoodahparade.info

More about the Tryouts: Individuals of all genders, shapes, ages, and persuasions tested their fate to become queen. Contestants are usually outnumbered by equally-costumed judges, who include  many former queens, and another hundred or so parade entrants, tryout supporters, Legion members, and the curious public. The town-hall setting with long tables in beer-fest style, crock pot chili, and legendary Doo Dah House Band, Snotty Scotty and the Hankies on stage, set the mood for the lively caucus.

Even More Info: Organizers staged the first public tryouts in 1998 at a Gothic house on stilts. It then moved to the famed Zorthian Ranch, in Altadena. This and other parodies of Pasadena’s ‘Other Parade’ have fueled Doo Dah’s colorful and controversial life on Colorado Boulevard. The 34th Occasional Pasadena Doo Dah Parade will be held on Saturday, April 30th stepping off at 11:00am on the streets of East Pasadena.

On April 2 at the American Legion in East Pasadena, a new queen will be crowned by the esteemed judges of the Occasional Pasadena Doo Dah Parade.

Follow this link and learn from photographer/reporter extraordinaire and Official Doo Dah Knight Terry Miller why you should throw your hat in the ring for your chance to be the royal belle of the biggest party in Pasadena:

Begin practicing your talent and

Carry on, as you were!

We are excited to announce that the 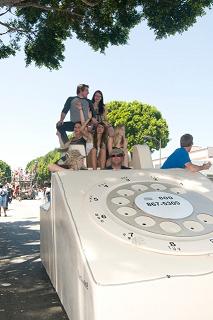 As always, we will need volunteers in the morning hours to help us with staging, set up, street monitoring, entry handling, parking, equipment, check in area, crowd control, and clean up!

Be behind the scenes at the master controls of one of the most colorful and unique experiences around! There will be music, floats, zombies and disco dancers, schmaltzy shtick, furry things, cosmic people, crazy people, exotic animals, and anything the imagination dictates!

For more on the parade, please visit

“GO TO LIGHT BRINGER PROJECT fan page AND Like Us!”