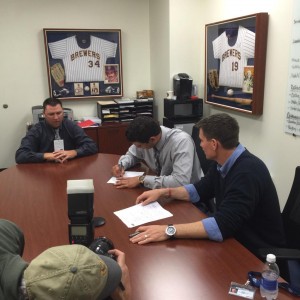 The Cal Poly Pomona baseball team finished off what has been a grand year for the school’s athletic department, ending up third, just one game short of playing for a national title.

But the Broncos had success across the board and captured the Robert J. Hiegert Commissioner’s Cup for the first time.

Chico State and UC San Diego, the schools that traditionally battle it out for that honor, were second and third respectively.

The award, named in honor of former Commissioner Robert J. Hiegert, is given to the California Collegiate Athletic Association (CCAA) member institution with the highest aggregate ranking in eight of the CCAA’s 12 championship sport offerings.

“We looked at it at the end of the winter, and we thought we had a chance,” Cal Poly Pomona Athletic Director Brian Swanson said. “Then halfway through the spring we really felt good about where we were at.”

The eight CPP teams that contributed points all finished third or better in the conference regular-season standings. The other Broncos’ squads — men’s soccer and volleyball — also put together great seasons. Men’s soccer captured the CCAA tournament title while volleyball posted a 15-10 overall record.

In the fall, the Broncos earned points from men’s and women’s cross country as those programs finished second in the CCAA, with the men ending up 16th at the NCAA Division II National Championships.

CPP women’s soccer finished third in the regular season. The Broncos later reached the third round of the NCAA postseason for the first time in 15 years and closed out the campaign with a No. 16 national ranking.

A ranking is calculated using a school’s top two conference finishes in the fall, winter, and spring, as well as the highest two other finishes. An institution’s numerical finish for team sports is determined by regular-season standings. Individual sports finishes are determined by the finishes at the season-ending championship event.

“We have had a lot of support across campus,” Swanson said. “It’s a win-win not just for us in athletics but across the whole campus. It also takes the support staff that people may not see and know much about to have this kind of success.”

Cal State San Bernardino was seventh of the 12 teams with 40.5 points, just a half-point behind sixth-place Cal State Los Angeles.