It may have taken more than one try but Chaffey College sophomore Marquis Wimberly has decided where he wants to continue his playing career and get an education.

Wimberly, a 6-foot-2, 200-pound wide receiver, has made a verbal commitment to University of Alabama-Birmingham.

He originally committed to UNLV, only to open up the recruiting process again in December.

“I just decided that wasn’t the place for me,” Wimberly said of UNLV. “I think there will be too many distractions. I want to go where I can focus on school and football.”

Among the other schools he was considering were Texas State, Marshall, Georgia State and Southern Mississippi.

UAB is a start up program that will be fielding a team but not competing next season. It’s first year of actual competition will be 2017.

That suits Wimberly just fine. He wants to use that year to help him get ahead academically and would like to get a master’s degree before he graduates.

“This is really about doing something for my future,” he said.

Wimberly, a graduate of Upland High School, caught 59 passes for 782 yards and 14 touchdowns last year for the Panthers. 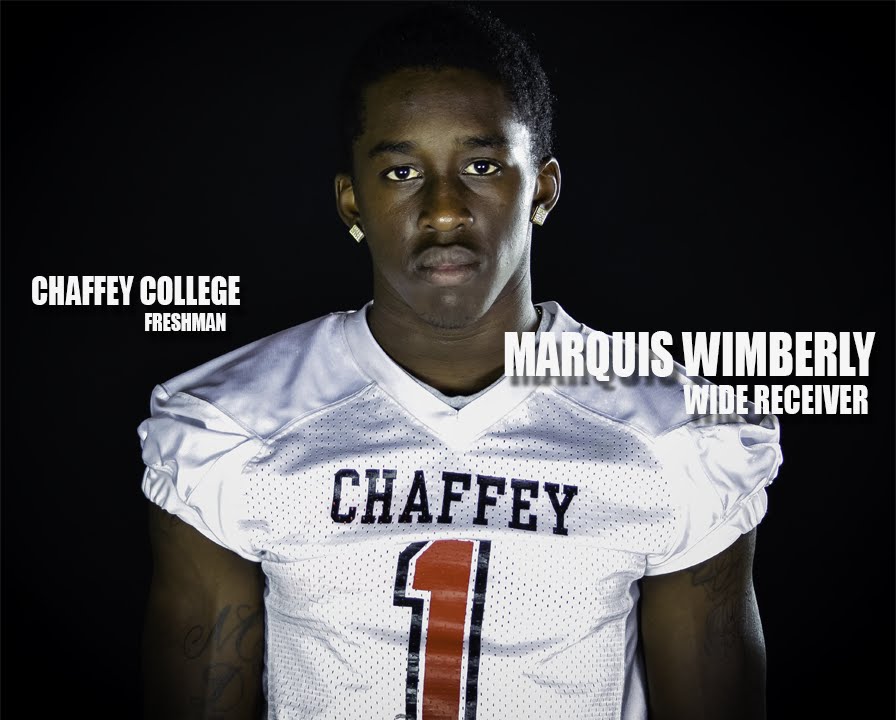 The 6-foot-2, 200-pound wide receiver is headed into his sophomore year at Chaffey College and was relieved to have the recruiting process behind him.

“The whole process is stressful, fun, there’s pressure. It has a lot of ups and downs,” he said. “Having the decision out of the way is a big relief. Now I can just work on getting better and showing what I can do.”

He said the campus atmosphere and coaching staff made the difference. Wimberly said he hit it off right away with new head coach Tony Sanchez.

“I liked the atmosphere of the campus and the town,” he said. “And I really like coach Sanchez both as a coach and as a person.”

Wimberly caught 49 passes for 659 yards and three touchdowns in 11 games last year for the Chaffey Panthers.

He said he is looking forward to competing for a starting spot in 2016. Typically community college players that move on to Division I schools are brought in to contribute right away since they only have two years of eligibility left.

Chaffey High School football standout Marquis Wimberly is going through the recruiting process all over again.

Wimberly, a 6-foot-2, 200-pound wide receiver out of Upland High School, had offers from Utah State and Nevada a year ago out of high school but didn’t qualify a academically. So he spent this season at Chaffey College where had hauled in 49 passes for 659 yards and three touchdowns.

Some higher profile schools are starting to jump on board too. Later in the week he’ll take part in  a camp at Corona Centennial at which Boise State plans to visit and could potentially offer. That’s the school Wimberly is highest on now but he isn’t ruling out any of his options.

His mother lives in Arizona so he is planning trips to Northern Arizona and Arizona State this week.

Location isn’t an issue. He just wants to play.

“I want to go to the place that gives me the best opportunity to show what I can do,” he says.