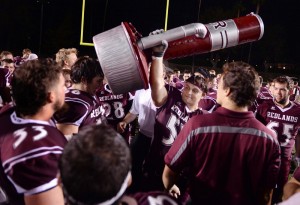 The University of Redlands football team retained the Smudge Pot in rather emphatic fashion, trouncing Cal Lutheran 59-27 at Ted Runner Stadium on Saturday.

It was third Smudge Pot game between the SCIAC rivals, the inaugural won by the Kingsmen in 2012 and the last two by the Bulldogs.

Bragging rights are nice. But the game likely means much more than that. Redlands and Cal Lutheran have been the dominant teams in the conference the last decade or so, so a win will go a long way toward determining the first-place finisher.

Yes it comes early in the conference schedule and there are many more games to go but it does establish the Bulldogs up as the team to beat.

It was hard to tell what to expect from Redlands which played two of the top five teams in the country before opening conference play.  Then came a decisive win over Pomona-Pitzer, traditionally one of the bottom contenders. So the jury was still out.

That is the case  no loner. This was a quality win over the team that has been the biggest threat to win the conference as the Kingsmen claimed four straight titles from 2009 to 2012.

The Bulldogs just need to stay focused and not play down to the level of the competition in games they seemingly should win.