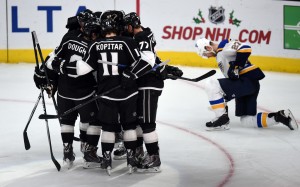 Anze Kopitar had nine points, including eight assists, during a three-game scoring spree in which he led the Kings to victories in two of three games last week. The NHL apparently stayed up late to watch and on Monday named Kopitar its first start of the week. Kopitar had a career-high five points, including four assists, in the Kings’ 6-4 come-from-behind victory Thursday over the St. Louis Blues. He also had three assists in their win Saturday over the Arizona Coyotes.

Jakub Voracek of the Philadelphia Flyers was named the NHL’s second star and Marc-Andre Fluery of the Pittsburgh Penguins was the third star.