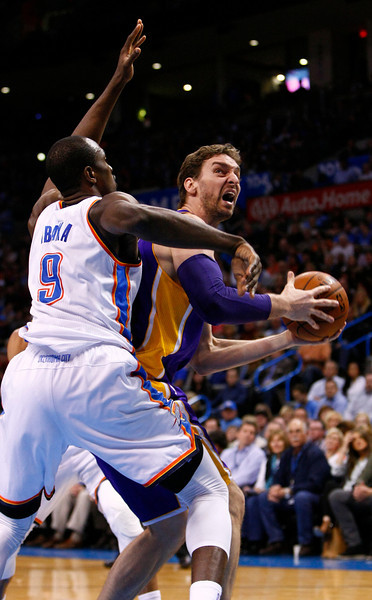 OKLAHOMA CITY — The bond Kobe Bryant and Pau Gasol formed runs in many directions, and it doesn’t just include winning two NBA championships and meshing complementary personalities together.

“I’m glad that he spoke his mind,” Gasol said following the Lakers’ 131-102 loss Thursday to the Oklahoma City Thunder at Chesapeake Energy Arena. “He wants to win. He’s got two years under contract with the franchise. He wants to be in the best possible position to win. Whether you do that publicly or internally, that’s totally up to you. He spoke his mind and you have to respect him for that.”

Will the Lakers pull that off?

D’Antoni has two years left on his contract, but only next season is guaranteed. Despite the persistent losing, Lakers general manager Mitch Kupchak has praised D’Antoni for how he’s handled an injury-decimated roster that features plenty of young players that likely wouldn’t have significant roles elsewhere. A source familiar with the situation said the Lakers front office has never suggested D’Antoni’s job is in jeopardy after this season. But the Lakers won’t evaluate D’Antoni until the season ends so they can fully assess both the roster and their offseason needs.

Meanwhile, the Lakers don’t expect LeBron James to leave the Miami Heat if he opts out of his contract. The Lakers aren’t thrilled about Carmelo Anthony should he opt out of his deal with the Knicks. The Lakers wouldn’t want to spend a max-level contract on Cleveland’s Luol Deng and on Toronto’s Kyle Lowry. Kupchak had suggested earlier that the Lakers may use their financial flexibility more conservatively both to save up for a star-studded 2015 free-agent class and because of recently-imposed harsher penalties for high-spending teams.

“It makes things harder for teams, but it is what it is,” Gasol said. “The rules keep changing over the years. But you have to adjust and make the best out of it.”