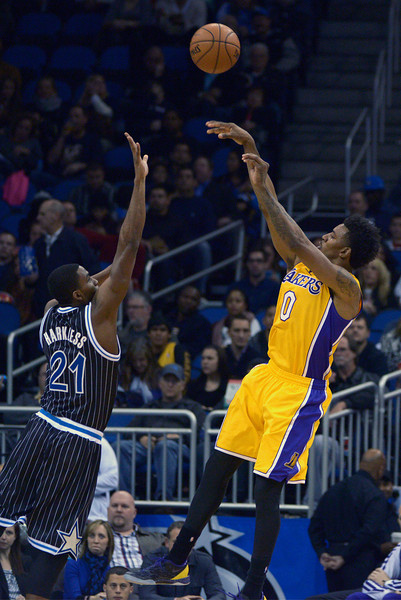 OKLAHOMA CITY — Forward Nick Young told this newspaper he has aimed to return next Wednesday when the Lakers host the San Antonio at Staples Center.

He has missed 14 of the past 15 games because of soreness in his left knee and hasn’t progressed his rehab beyond weight training, spot-up shooting and running on a weight-bearing treadmill. Young has ranked second on the Lakers in scoring, averaging 16.8 points.

Young had hoped to return on the Lakers’ two-game trip this week that included a 131-102 loss Thursday in Oklahoma City followed by a game tonight in San Antonio. But Young couldn’t practice this week as he had hoped. During the Lakers’ lone practice this week on Wednesday, Young was limited to an individual weight training session and running on a weight-bearing treadmill.

After tonight’s game in San Antonio, the Lakers don’t play again until their matchup on Wednesday against the Spurs at Staples Center, giving Young more opportunities to practice. Young said the Lakers training staff has informed him his return hinges on if he can participate in at least a full practice without any setbacks.

“They want the bruise to heal,” said Young, who added he doesn’t need to wear a brace on his knee. “If I keep getting hit, I would be out longer.”

Lakers notes: Steve Nash officially ruled out for the rest of the season