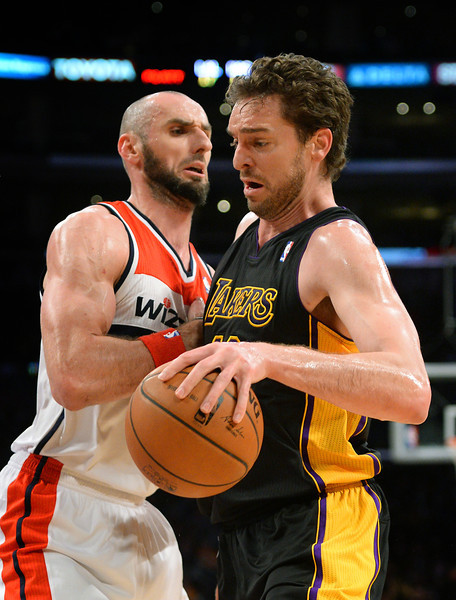 Pau Gasol did not travel with the Lakers (24-46) for their trip to Milwaukee (Thursday) and Minnesota (Friday) after a visit with a ear, note and throat specialist on Wednesday showed he still has symptoms pertaining to vertigo.

Gasol’s ailments began when he felt dizziness during the Lakers’ win Sunday over Orlando before skipping the second half to receive three liters of intravenous fluids before eventually spending the night in a nearby hospital. He was discharged the next day, but still sat out of the Lakers’ win Tuesday over New York.

Gasol does not plan to receive additional treatment other than resting at his Redondo Beach residence. Gasol has not received any medical clearance to exercise in any way.

Steve Nash and Jordan Farmar traveled with the Lakers on their Wednesday morning flight to Milwaukee despite nursing respective back and right groin injuries. But Nash’s status is listed as questionable after missing the past two games because of recurring nerve irritation in his back, an injury that has sidelined him for all but 11 games this season. Farmar has missed the past four games because of a strained right groin and will stay out for at least another week.

Chris Kaman will likely start in Gasol’s place. Kaman has had a diminished role this year, but has started seamlessly during nine games Gasol has missed due to various ailments. In the Lakers’ win Tuesday over New York, Kaman posted 13 points on 5-of-10 shooting and nine rebounds in 23 minutes.