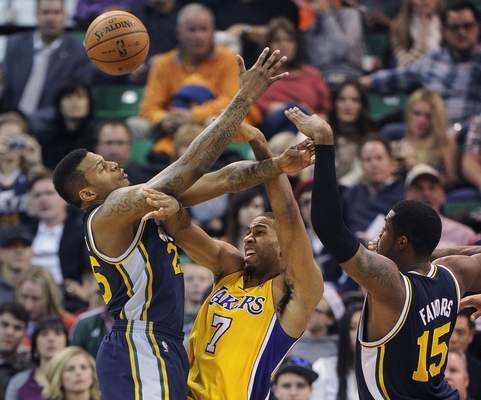 A collective gasp floats through the air as Xavier Henry explodes to the rim.

The Laker fans at Staples Center feel it. So do Henry’s teammates and coaches.

They continuously marvel as Henry defies gravity, posts a team-leading 22 points on 8-of-11 shooting in the Lakers’ 127-96 win Tuesday over the New York Knicks at Staples Center and plays uninhibited from a torn ligament in his left wrist that will require offseason surgery.

“He loves to play and battles,” Lakers coach Mike D’Antoni said, shaking his head in amazement, mindful that Henry also has nursed pain from bone spurs in his right knee that kept him sidelined this season for 28 games. “He’s fearless. He’s a tough guy.”

The Lakers equally cringe when they see Henry leaping into the air, afraid that one awkward twist, jump or fall could derail one of the team’s most pleasant surprises.

“He’s like a bull out there. He just goes with no fear,” Lakers center Chris Kaman said. “Maybe that’s part of the reason why he’s hurt.”

Actually, it is the reason why Henry is hurt.

He tore his lateral meniscus in his right knee on Dec. 29 against Philadelphia after he drove to the basket and struggled to regain his footing after running one too many steps. Henry injured his left wrist last week against Washington after exploding to the rim and drawing contact. Hence, why the Lakers have pleaded for Henry to dial back.

“We tell him to be cautious,” Lakers forward Nick Young said. “He’s injured. But he’s got to get going. He’s not listening.”

“All the time they tell me I’m crazy,” Henry said. “They say, ‘What are you doing this for? You have nothing to prove.’ I have something to prove to myself. I’m not quitting. I’m not going to take a step back.”

Henry might feel pain in his left wrist and right knee every second of the day. He may need around-the-clock treatment to keep his injured body parts functional. But Henry vowed he won’t change his aggressiveness, shooting stroke or driving tendencies. Opponents may see Henry as a vulnerable target. They may go out of their way to hurt his wrist and knee even more. Henry vows he will just attack first and stronger.

Henry prefers dealing with the pain this offseason handling his injuries and rehabbing them than the possible pain he will feel that teams passed him up during free agency because he failed to squeeze the most out of his beat up body.

“Everybody has in their mind that we’re free agents in the summer and we have to show what we have,” said Henry, who made under $1 million this season. “It’s a different position to be in. But it’s also fun. We have a great group of guys, so I like it.”

At first, Henry liked plenty of things about this season.

He quickly morphed from a training camp invitee toward a wing player. In the Lakers’ preseason opener win over Golden State, he posted a career-high 29 points. In the Lakers’ season opener win over the Clippers, Henry built on that with 22 points. By the third game of the season against San Antonio, Henry showed his first signs of unyielding toughness by playing through a battered forehead that eventually required stitches. Henry even ascended into the starting lineup.

Just as Henry’s quick slashes to the basket symbolized his ascension, his wreckless driving symbolized his fall. On Dec. 29, Henry injured his knee, and an expected seven-to-10 day recovery soon expanded into a near two-month absence. Amid other injuries namely to Kobe Bryant (fractured left knee) and Steve Nash (nerve irritation in back), the Lakers’ 13-16 record before Henry’s absence soon spiraled into an eventual missed playoff appearance for only the fifth time in franchise history.

“It was real frustrating. That was real hard to watch,” Henry said. “The two months I was out was killing me. I can’t sit and just watch basketball. I have to play when I know I can make an impact.”

And now that he is on the court, Henry refuses to hold back.

“I try to be the X factor as much as I can,” Henry said. “I know what type of game I have and what type of difference I can make. Whenever I get the opportunity, I just want to make the most of it.”

Henry sure made the most of the Lakers’ win over New York. His 22 points featured an equal share of drives to the rack and deep jumpers. Henry’s 13 second-quarter points played a large part in the Lakers outscoring the Knicks, 36-20, in that time frame. Henry’s length, hustle and athleticism strongly influenced New York shooting only 26.7 percent from three-point range.

Oh yeah, and he did all this without showing any visible signs that he nursed a battered knee and wrist.

“I feel it because of the some of the plays I make when I dunk the ball and do stupid stuff like that,” Henry said. “You play off of adrenaline. I play off energy. I’m doing the best I can to help my team and forget it. It’ll hurt a little bit. But then I’m right back at it and on to the next thing. It’s not a big deal.”

But it actually is a big deal.

It is a big deal to Henry’s teammates.

“I have a lot of respect for him because of the way he’s battling through serious injuries this year,” Kaman said. “He continues to put his foot forward. He keeps playing hard.”

It is a big deal to Henry’s coaches.

“You owe it yourself to give your career the best jump-start it can get,” D’Antoni said. “These are good guys that have been thrown into a horrible situation. But they’re battling.”

It is a big deal to Bryant, who has cemented part of his legacy by playing through too many injuries to count.

“Kobe takes little shots at me all the time,” Henry said. “But I just use it as motivation. He’ll say something. But I’ll be like, ‘I know you respect me.'”

But never will Henry retort that Bryant appeared in only six games this season before fracturing his left knee and never playing since then.

“I’m not going to disrespect one of the greatest,” Henry said of Bryant. “I’ll let him do him. He has his own mindset and own goal of being tough. Whatever he wants to do, he’s going to do. I’m not going to come at him.”

Instead, Henry will talk with his actions.

He has relied on never-ending treatment to ensure he remains healthy enough to play. Henry has leaned on his Christian faith to help him keep a positive mindset. He mentally forces himself to forget the pain he feels as he runs up and down the court. And despite the Lakers’ pleas for him to stay careful, Henry respectfully refuses to listen.

“I appreciate them caring about me,” Henry said about his teammates. “But at the same time, as long as I got something to prove to myself and I’m mentally tough enough, I’m not going to quit.”

That leaves the Lakers both equally inspired and anxious.

“There’s a difference between being hurt and being injured,” D’Antoni said. “If he’s hurt, he’s hurt and can play through it. If he’s injured, you have to get out. He has to know the difference.”

With each drive, jump and dunk, the Lakers will soon find out through the 12 remaining games if Henry does.