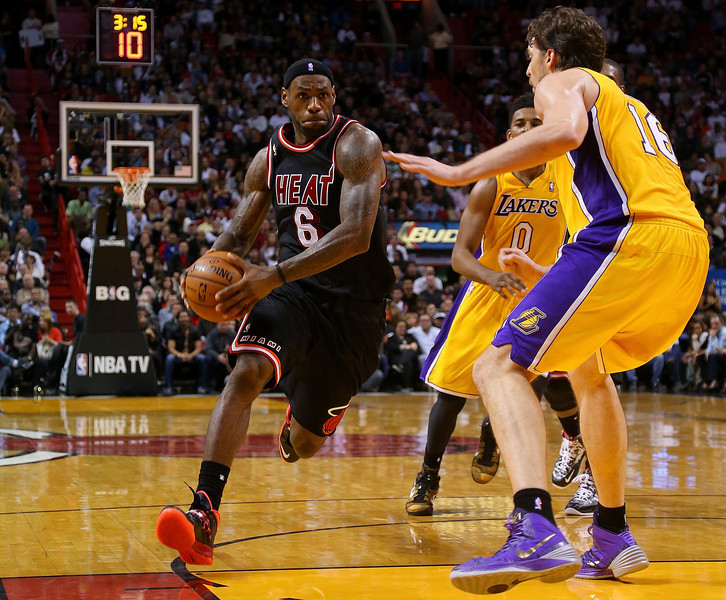 LeBron James #6 of the Miami Heat drives on Pau Gasol #16 of the Los Angeles Lakers during a game at American Airlines Arena on January 23, 2014 in Miami, Florida. (Photo by Mike Ehrmann/Getty Images)

He has written about history through a series of books that centers on everything ranging from sports to civil rights. Abdul-Jabbar has set history by remaining the NBA’s all-time leading scorer, perfecting the unstoppable skyhook and becoming the lone NBA player to compile both six NBA championships and six MVPS through a 20-year span with the Milwaukee Bucks and Lakers. He has also defended history, taking offense to LeBron James’ recent claim that he will appear on the so-called “Mt. Rushmore” of NBA greats along with Michael Jordan, Magic Johnson and Larry Bird. James also credited Oscar Robertson on that path, but he said that name last before adding he would replace one of those players once his career ends.

That prompted Abdul-Jabbar to knock King James off of his throne and remove his crown.

“LeBron James was talking about how he’s the best ever,” Abdul-Jabbar said in a wide-ranging interview with this newspaper. “He never saw Wilt Chamberlain play. If he had, he wouldn’t say that. Whenever he averages 55 points a game, then I might want to listen to what he has to say. I’m not trying to put LeBron down. He’s awesome. He’s the best player in this era at this point. But he didn’t see Bill Russell play. When his team wins eight consecutive NBA championships, maybe I’ll compare him to Bill Russell. Until then, he has to prove a few things. I don’t want to put LeBron down. He’s awesome and great for the game and a class guy. But there’s a lot more to that.”

“What if LeBron had to guard Elgin Baylor? I don’t know if LeBron would’ve had a good night that night. Those days, you could handcheck and the game was more physical. Now you can’t do those things and you can dribble the ball like this now, said Abdul-Jabbar said, mimicking a carrying motion. “We couldn’t do that. It was a more difficult game to play. I don’t think he gets it in terms of the great athletes that have played this game.”

Abdul-Jabbar would have reason to feel offended James left him off the list too. Yet, he never brought that up until he was asked him where he stands among the NBA greats.

“As long as I’m in the discussion, that’s fine with me,” Abdul-Jabbar said. “I don’t expect all people to say Kareem. People have their biases. That’s the way life is. That’s not something I get excited about it, but I do feel I belong in the conversation.”

Abdul-Jabbar then ticked off a litany of names, including Russell, Chamberlain, Robertson, Baylor, Jerry West, Earl Monroe, Dave Bing and Gus Johnson before revealing “it will never be determined” who truly belongs on the Mt. Rushmore.

“It’s impossible to judge over the generations. Every ten years you should have rank a 10-year team,” Abdul-Jabbar said. “I guess that’s why they have sports bars so people can argue about this kind of stuff. You’re not going to resolve it.”