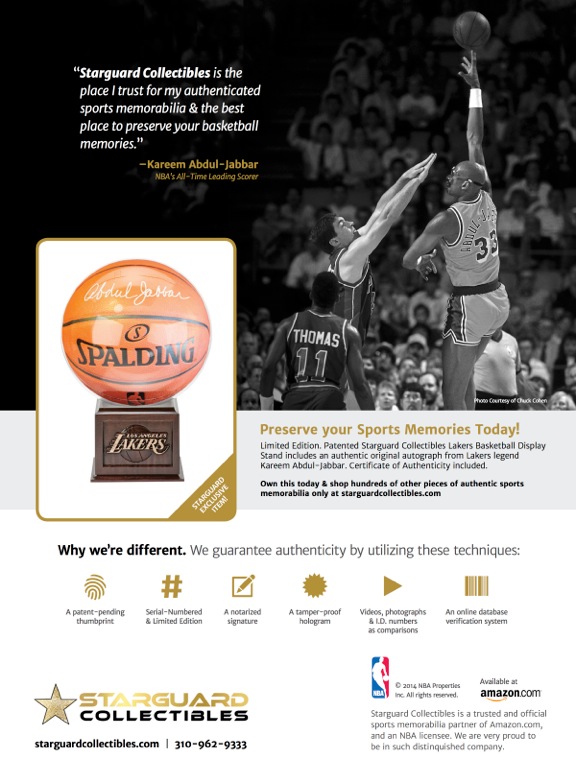 The man once shied away from autograph seekers, and the reasons went beyond Kareem Abdul-Jabbar’s introverted personality and penchant for privacy.

He also became increasingly skeptical with the intentions.

“Magic Johnson and Michael Jordan would have to have 50 arms a piece to sign as much bogus stuff as I see out there,” Abdul-Jabbar said in a recent interview with this newspaper. “People come to me with fake jerseys. They’re ripping me off, but they want me to sign it. I’m not going to do it. They get [ticked]. It’s a big mess.”

To address that issue, Abdul-Jabbar partnered with Starguard Collectibles in conjunction with Amazon.com to sell of his sports memorabilia that remains truly authentic. For example, one of Abdul-Jabbar’s collectible items includes an acrylic painting of wearing a UCLA uniform, his inked fingerprint on a signed basketball and a basketball card for $5,600. Abdul-Jabbar other NBA stars, including Bill Walton, Michael Cooper and A.C. Green, are featured as well. All the memorabilia are sold directly from athletes, and the items are authenticated and verified using the athlete’s DNA.

“We wanted to do something where everything is verifiable,” Abdul-Jabbar said. “That’s one of the things about Amazon, it guarantees everything. We had to have our stuff together to get them to come on board. I think that’s the best people for us to be involved in because we can verify everything. All of our stuff you can check it.”