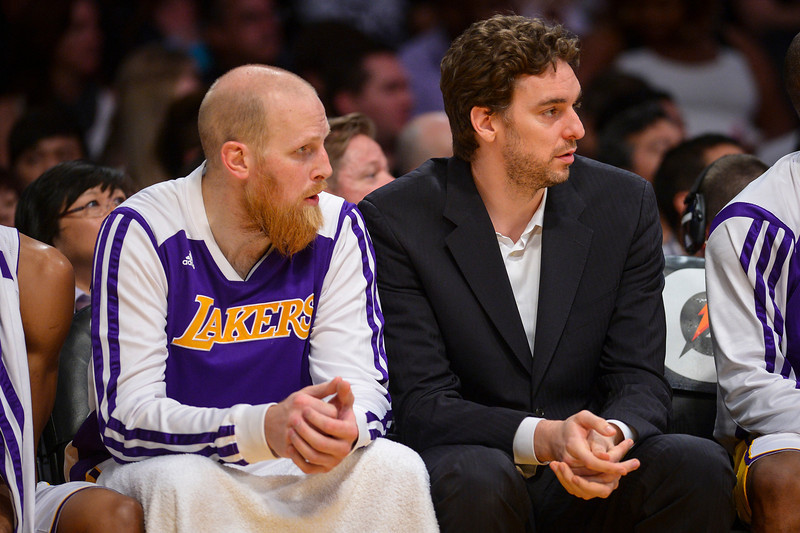 The dread on Mike D’Antoni’s face told the entire story.

Chris Kaman had just posted 28 points on 13-of-19 shooting, 17 rebounds and six assists in the Lakers’ 115-99 victory Sunday over the Phoenix Suns at Staples Center, a rare feel-good moment for a player that had mostly become the casualty of D’Antoni’s system that calls for stretch forwards.

Kaman has only started in the past four games because Pau Gasol has suffered from vertigo. Kaman also lasted only five minutes in the Lakers’ loss Friday to Minnesota after playing sub-par defense on Nikola Pekovic. So with the possibility that Gasol returns sometime this week, where does that put Kaman? Immediately back to the bench?

“I don’t know. It’s tough because Robert Sacre plays,” said D’Antoni, who has preferred his defense over Kaman. “They play the same type of game and it’s going to be tough. I’ll try to figure that one out. Up until now, that hasn’t gone too well. I’d love for him to play. But we’ll have to see what happens.”

Kaman dominated everywhere, showing a nice touch inside, in the post, on mid-range jumpers and on pick-and-rolls. All of those sequences led Kaman to push within striking distance of surpassing his career-high 29 points as a Clippers against the Houston Rockets on Dec. 22, 2009. Such plays led the non-sellout crowd of 18,355 fans to give Kaman a standing ovation when he left the game with 37.4 seconds remaining. Such a performance provided a rare feel good moment to player that has missed 36 games partly because of injuries and mostly because of D’Antoni’s preference for a smaller and quicker lineup.

But after seeing Kaman play with a skillset that boasts plenty of versatility, will D’Antoni relent and play him along with Gasol?

“We’ve tried it,” D’Antoni said. “It’s not good. Most teams play the stretch 4. When they do that, they will hurt us. We don’t guard the rim that well. We’ll see. Obviously I want to play him. We’ll try to do something.”

The numbers actually show that among the 14 games Gasol and Kaman played together, they averaged 20.4 points on 45% shooting and 9.5 rebounds, a lower mark than the Gasol-Sacre tandem produced in 11 games that entailed 30.9 points per game on 46.2% shooting and 12.8 rebounds. Still, the Gasol-Sacre tandem has yielded a negative 6.9 plus-minus rating, while the Gasol-Kaman pair created a negative 1.6 plus-minus rating. It’s necessary to keep in mind, though, that plus-minus ratings are a tad misleading since it accounts for the other players on the floor.

Kaman has been fairly vocal about his frustrations surrounding his lack of playing time, his little communication with D’Antoni and his preference to play with Gasol. But Kaman did not speak with reporters, other than talking with Time Warner Cable SportsNet about his rhythm and the Lakers’ efforts to spoil playoff aspirations for contending teams. Instead, his play spoke for itself.

“He has talent. He came ready to play,” D’Antoni said. “If you play with the ball moving where everyone is moving and sharing, then guys like Kaman with the talent that he has will score a lot of points. He did a great job of getting buckets when we needed them. They couldn’t guard him on the other end, so that helps. He had a great performance.”

But perhaps not a good enough performance for Kaman to have the chance to duplicate it again,