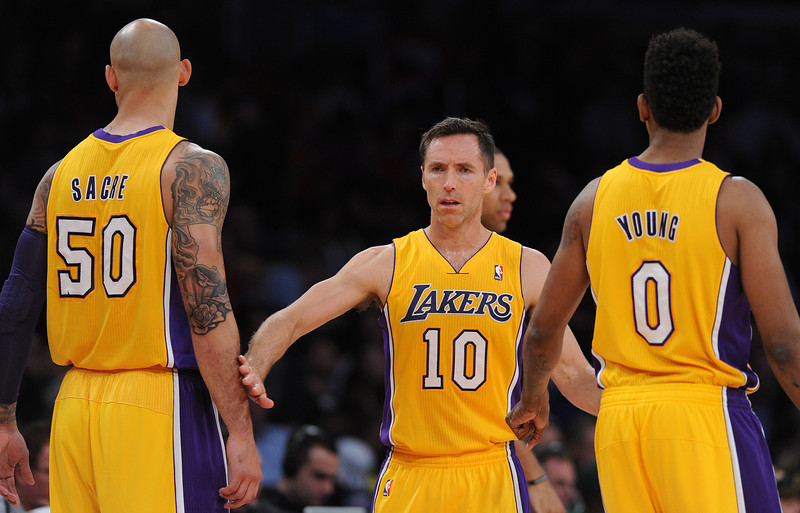 TNT analyst and former NBA star Chris Webber was on hand for the Lakers’ 124-112 loss Tuesday to the Portland Trail Blazers at Staples Center. And with that, Webber touched on a number of topics surrounding the purple and gold. Below are a few released through TNT:

Webber on the future of the Lakers: “If you are a Lakers fan, you’re very upset about this season with the injuries to [Lakers veterans] Steve Nash and Kobe Bryant. But if you look forward to the future, these young guys like [Lakers guards] Kent Bazemore and Jodie Meeks are getting a lot of playing time. If they’re going to be on this team in the future, experience is what you need now since you are out of the playoff race. There are still some positive things happening [for the Lakers].”

Webber on the return of veteran Steve Nash from injury: “He does not have to play, but there is a button in his head that tells him to go get the ball, jump and shoot like he used to be able to. You can’t do that as a veteran player. It is so frustrating; it’s like a game within itself. Nash is out here for the love. You have to love, respect and honor that. You just hope he has fun while he’s playing and finishing out his career.”

Webber on Nash’s craftiness: “That’s what’s so scary about great point guards like Nash – the defense has to run back as fast as they can, talk to each other, identify who they’re guarding and keep communicating. If not, Nash is so crafty he will wait for one hole in the defense and take advantage of it.”

Webber on young players wanting to go prove themselves against Nash: “If you think about when Michael Jordan got to the end of his career, or as a young player when I got to play against Charles Barkley at the end of his career…there’s no way I would not want to take advantage of that. Unfortunately, Steve Nash is in that same position. Being a living legend, the guys want to make their name off of him.”

Webber on Lakers forward Nick Young: “He’s one of those players that you just love watching play because he has so much fun. He’s engaged in the game, especially on offense. He’s been electrifying off this bench. Even more impressive to me is [Lakers head coach] Mike D’Antoni says he’s wonderful to have in the locker room, and that’s even more of a pleasure when you have a guy that can score and knock it down like that.”

Webber on the emergence of Lakers guard Jodie Meeks: “Jodie Meeks can play ball. Unfortunately, it took the injuries of [Lakers All-Star] Kobe Bryant and others for him to see a lot of time. Kobe will be back, but in the meantime Meeks is improving.”

Webber on the future of the many Lakers players that will be free agents at the end of the season: “It’s still in the Lakers’ hands. They can evaluate the talent. They know where they want to move forward in the future, so right now everyone is giving their best audition. Each player relishes the chance to get this much time…it usually doesn’t happen for these [type of] players in the league.”

Webber on the Lakers players trying to prove themselves in the wake of injuries to multiple starters this season: “They want to show right now how good of a teammate they can be. If you can be a good teammate during a losing season, you definitely can be one during a winning season.”