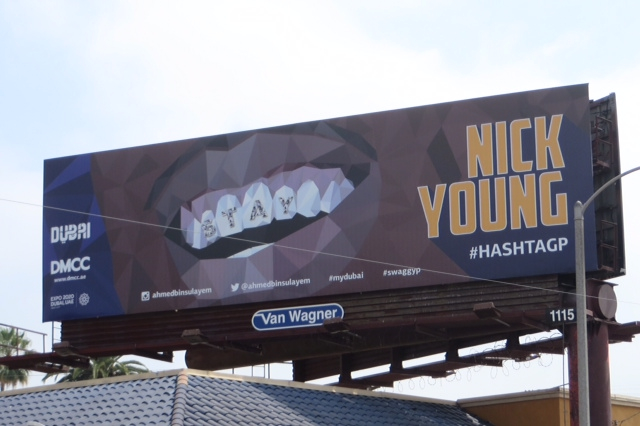 Those billboards plastered around Los Angeles that pleaded for Dwight Howard to stay did not work so well.

Howard ignored them and left for Houston in the 2013 offseason for reasons involving a more talented and younger roster, personality clashes with Kobe Bryant, philosophical differences with Mike D’Antoni and uncertainty whether the Lakers’ front office had the same vision the late owner Jerry Buss in guiding the franchise back into championship contention. Meanwhile, sentiment within the Lakers remained split on whether the campaign was en empty gesture asking Howard to stay or a look that made an accomplished organization look desperate.

With free agency on the horizon once again, another billboard campaign has started. But the Lakers have nothing to do with it. Instead, Ahmed Bin Sulayem, a Lakers fan based in Dubai, has launched his own billboard efforts to convince Nick Young to stay after opting out of his $1.2 million player option in hopes of a longer and more lucrative deal with the purple and gold. Sulayem, the executive chairman of the Dubai Multi Commodities Center, began a two-week venture on June 21 that entails advertisements on billboards, bus stops near Staples Center featuring a likeness of Young’s smile and gold studs on his teeth spelling out the word, “STAY.”

“These campaigns are not just about creating noise they are all about supporting legends that deserve recognition for their continuous drive that inspires and exceeds expectations of millions of fans and supporters every day,” Bin Sulayem said in a statement. “In my view, Nick Young epitomizes exactly that and it would be amazing to see him in action at LA Lakers next season as well.”

Young told this newspaper last week that he wants to stay with the Lakers enough that he would consider taking a hometown discount, but that he wants a multi-year deal. He made $5.5 million with the Philadelphia 76ers in the 2012-13 season before playing for the Lakers last season for just over $1 million.

The Lakers like Young after he averaged a team-high 17.9 points a game and became a fan favorite for his inviting personality. But the Lakers want to minimize handing out multi-year deals to role players in hopes to maintain their financial flexibility for more high-profile players.

“That’s dope man,” Young said last week. “I feel good. They love me. The fans love me. They got to do something. There will be a riot if they don’t.”

Lakers hope to meet with LeBron James & Carmelo Anthony, but unsure of chances