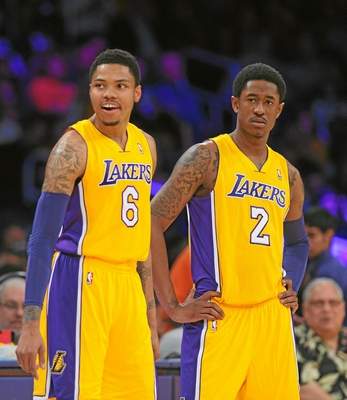 Newly-aquired Lakers Kent Bazemore, left, and MarShon Brooks wait at the scorers table during a timeout in the first half, Friday, February 21, 2014, at Staples Center. (Photo by Michael Owen Baker/L.A. Daily News)

In a move aimed to further maximize the cap space available both to sign LeBron James and Carmelo Anthony, the Lakers will not extend reserve forward Kent Bazemore the $1.1 million qualifying offer that would make him a restricted free agent, according to a league source familiar with the situation. Such a move also would have cost the Lakers $3 million in having a cap hold, a mechanism that is used to create space for a player expected to sign with a team.

This development was first reported by ESPN Los Angeles and Eurobasket.

Had they granted a qualifying offer to Bazemore, the Lakers would have had the rights to match any offer he could attract on other teams. Although Bazemore will test the open market, both Bazemore and the Lakers have mutual interest in each other, according to league sources familiar with the situation.

Ever since acquiring him in a trade that sent Steve Blake to the Golden State Warriors, the Lakers liked Bazemore’s athleticism, defensive energy and work ethic that spurred a 13.1 points per game average through 28 appearances. Bazemore had surgery to a repair a tendon in his right foot in April, but he has progressed since then toward on-court workouts, according to a league source familiar with his progress.

Bazemore would prefer re-signing with the Lakers, though he will prioritize having the chance to have a similar role as last season over the length and cost of any contract offer he receives.