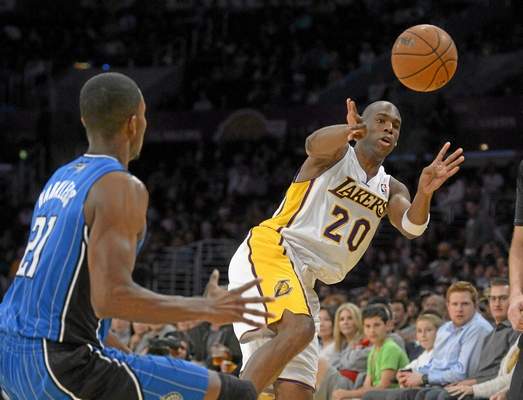 Lakers guard Jodie Meeks worked hard to maximize his opportunity to play more during the team’s injury-plagued season, and he plans to continue sharpening his skills during the summer. (File photo by Mark J. Terrill/Associated Press)

Apparently, the phone calls came in as swiftly as one of Jodie Meeks’ hot shooting performances.

“A number of teams,” including the Lakers, reached out to Meeks’ representatives on Monday night expressing interesting in acquiring him, according to a league source familiar with the situation.

It has not been specified what Meeks will look for in free agency, regarding the size and length of his contract and which teams would most interest him. But after posting a career-high 15.7 points on 46.3 percent shooting last season, Meeks expressed strong interest in re-signing with the Lakers.

The Lakers like Meeks, who showed marked improvement in all areas of his game, including driving, ball handling, shooting consistency and finishing. But the Lakers are trying to avoid signing all role players beyond one-year deals. After making $1.55 million last season with the Lakers, Meeks will likely field more lucrative offers.

The Lakers will first center their focus on acquiring LeBron James and/or Carmelo Anthony before filling out the rest of their roster.