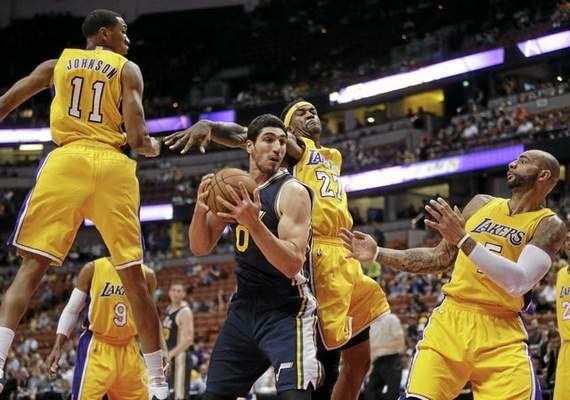 The NBA championship trophies sitting near the window in Jeanie Buss’ office may greet the Lakers every time they step foot on the practice floor. The celebrity starpower that still watch the Lakers at Staples Center may seem captivating. Even Byron Scott’s presence as the Lakers’ coach may spark up pleasant memories of the “Showtime Era.”

But in the land of Hollywood, the Lakers’ quest toward bouncing back from their worst season in L.A. franchise history will not involve special effects or star power.

The Lakers showed how those elements could work in their 98-91 preseason win on Sunday over the Utah Jazz at Staples Center.

The Lakers have already missed six players out with injuries, including Steve Nash, Jeremy Lin, Nick Young, Xavier Henry and Ryan Kelly. But they compensated by resorting to that identity Bryant described. Sure, it helped that Bryant posted a team-leading 26 points or that Carlos Boozer added 19 points. But those two players added double figures in other preseason games only to see the Lakers lose by double-digit margins. So with the Lakers trailing 54-38 at halftime, Scott offered one clear message.

“When we came out before the half even started, I said, ‘We’re not even going to talk about offense,” Scott recalled. “‘It’s all about us getting more aggressive on the defensive end and just getting better at it.’ That’s what we did.”

The Lakers sure did. The Lakers recorded eight of their 17 steals in the third quarter. Ronnie Price dove for loose balls and grabbed three of them. Carlos Boozer enhanced his defensive reputation with three swipes of his own. Such deflections set up multiple Wesley Johnson dunks. All of a sudden the Lakers outscored the Jazz, 31-18, in the third quarter. The Lakers kept that momentum going in the fourth quarter partly stemmed from Lakers rookie Julius Randle filling the passing lanes and showing stronger defensive communication.

“When you play good solid defense,” Scott said, “everything seems to be falling for you on the offensive end.”

“We’re a grind it out team. Our personalities are just that way,” Bryant said. “With the guys we have on the floor, we are a ‘put our hard hats on’ type of team.”

Kobe Bryant’s message to Julius Randle: “You ‘F’ this up, you’re a really big idiot”