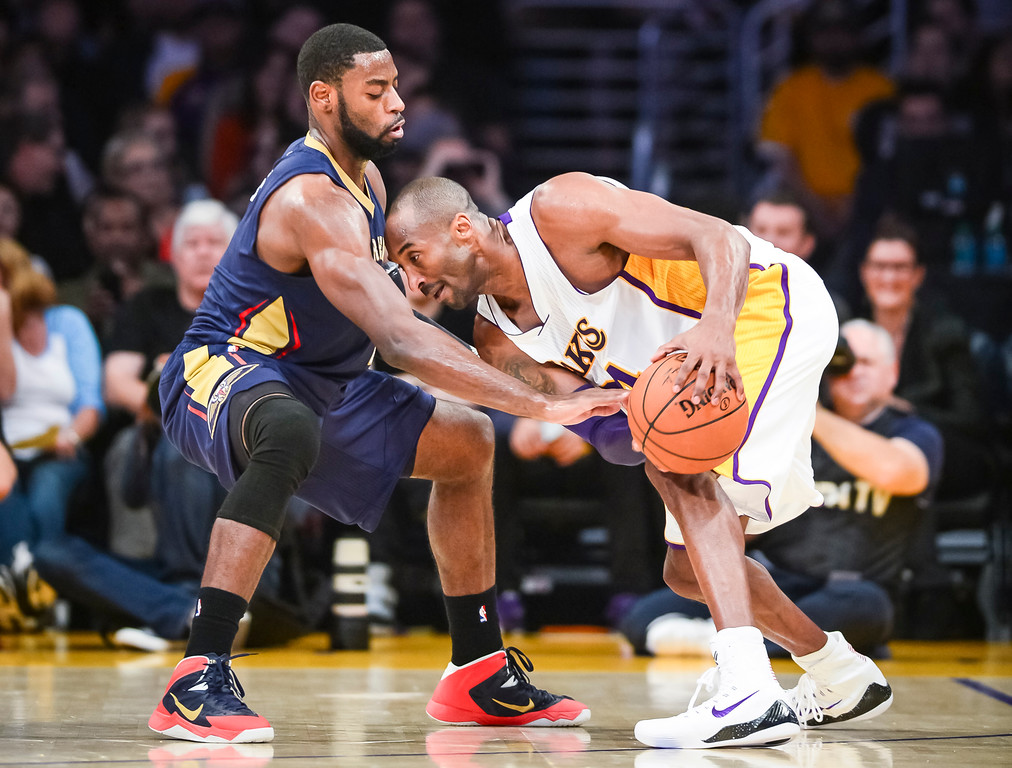 The Lakers have hit an iceberg. Their worst start in franchise history, league worst defense and no consistent signs of improvement all have contributed toward sinking at the bottom of the Western Conference standings.

But as Kobe Bryant said following the Lakers’ 104-87 loss on Sunday to the New Orleans Pelicans at Staples Center, “If this was the Titanic, I would go down with the ship. I’m not jumping off.”

Will the Lakers (5-16) follow suit? Will they have enough life boats? Will they avoid fighting over them if the sinking becomes inevitable?

“This is where you find out what your identity will be,” Bryant said. “You find out who’s competitive and who’s going to step up and take the challenge.”

It sure didn’t happen on Sunday.

The Lakers went 36-of-90 from the field. They allowed New Orleans to close out the third quarter with a 16-2 run and enter the final period with a 20-point lead. The 18,997 who bothered showing up to Staples Center booed the Lakers for, well, not showing up.

“The more we missed, the more we got deterred in thinking about what we’re doing,” Scott said. “We started thinking about missing the shots. All of a sudden we stopped playing the defense we started off playing.”

That has happened a lot this season.

So much that the Lakers rank last out of 30 NBA teams in total defense by allowing 110.09 points per game. So much that Scott believes the Lakers could have a sub. 500 record on effort alone, even when accounting for the flush of injuries, a brutal schedule and a new roster. So much that Scott admitted he doesn’t even know what the team’s identity entails.

Yet, Bryant defended Scott’s role in this, noting that both Scott and Lakers assistant coach Jim Eyen have “simplified” the team’s defensive coverages and that it’s “not very complicated.” Bryant also said the Lakers’ coaching staff went into detail about the team’s defensive game plan during morning shootaround.

“We have a very very simple defensive plan,” Bryant said. “If that’s not retaining, you got to really think a little bit more and do more repetitions to make sure it sinks in.”

It hasn’t sunk in. The Lakers looked equally bad defending from the perimeter as they did in protecting the paint. New Orleans went 8-of-18 from three-point range, while scoring 42 points inside.

That partly explains why Scott made lineup changes in the first place. He routinely lamented about Boozer’s defensive deficiencies, but that went nowhere. Although Lin has averaged 11.5 points on 44.5 percent shooting and 4.9 assists, Scott hasn’t liked how he has organized the offense, played with Bryant or defended opponents.

“It don’t matter to me. I think it depends on how Jeremy handles it and how Carlos handles it. I think they’ll both do extremely well with it,” Bryant said. “But ultimately no matter what the lineups are, you still have to perform. You still have to step up there and play and make sure guys are in the right frame of mind and emotionally in a good place to step out and perform.”

That didn’t always apply to Bryant.

His 14-points on 6-of-18 shooting featured plenty of times Bryant expressed frustration to the officials for missed calls. That delayed Bryant’s role in hustling back on defense. But an hour after the game, Bryant emerged in the Lakers’ locker room maintaining his public pragmatism and patience won’t waver amid the Lakers’ sinking fortunes.

“A lot of people are competitive when things are rolling their way and things they’re naturally good at. It takes a true competitive person when things are down to really step up to the plate and grab it,” Bryant said. “Everybody is waiting for me to blow up. But honestly, I really enjoy the process of it and challenge of it and trying to figure it out. Not everything will be great and champagne and celebrations of winning championships. You have to go through some hard stuff, too.”

Even if it entails the Lakers sinking lower and lower without the life jackets to keep them afloat.