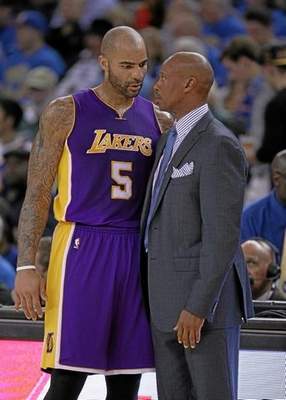 Head coach Byron Scott of the Los Angeles Lakers talks to Carlos Boozer #5 during their game against the Golden State Warriors at ORACLE Arena on November 1, 2014 in Oakland, California. Photo by Ezra Shaw/Getty Images

Lakers veteran forward Carlos Boozer sat out the entire fourth quarter of the Lakers’ 104-103 loss to the Charlotte Hornets at Time Warner Cable Arena. Though Boozer admitted afterwards, “I’m always ready to go back out,” he hardly questioned Byron Scott’s decision not to play him in crunch time.

“I’m trying to teach the guys how to win,” said Boozer, who posted 15 points on 5-of-8 shooting and 11 rebounds. “If I see things out there, I’ll let them know what I see and hope they see it for themselves, too. I try to keep guys in good spirits. It’s been a tough year for us, but we’re fighting through it together.”

Scott demoted Boozer into a bench role after 20 games into the season because of his concerns about his defense. Boozer publicly disagreed with the decision and even talked to Lakers general manager Mitch Kupchak about the decision. But since then, Boozer has maintained a positive attitude both in his post-game comments and his sideline demeanor, even when he did not play two weeks ago because of a coach’s decision. Boozer frequently praises teammates in interviews and congratulates them on the bench with high-fives.

“I’m a positive man,” Boozer said. “I give my parents all the credit for that. They gave us a positive environment. We didn’t have a lot growing up. But we made it fun.”

Boozer may not have questioned Scott’s latest decision. But Scott said he went against his initial instinct in playing Boozer with six minutes remaining after liking the play of Jordan Hill and Ed Davis. Hill scored all 10 of his points in the fourth quarter, while Davis made up for his two points in the fourth quarter with floor spacing and defense.

“I was really happy with the way that Ed and Jordan were playing at that particular time,” Scott said. “They were bringing us back in the game so I stuck with them for a little while.”

“They’ll learn. It’s the circle of life, brother,” Boozer said. “Just trying to help out and enjoy the rest of the season. Just try to see if we can get as many wins as possible before it’s all over.”