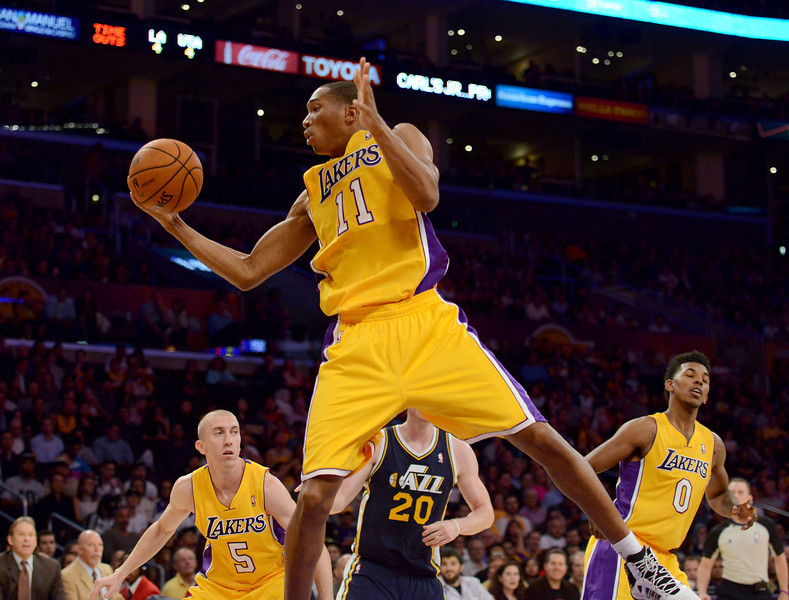 The unsolved mysteries that the Lakers have tackled these days seem plenty.

There marks the 82.8 percent chance the Lakers land in the top five of the NBA draft lottery, though a slim albeit significant 17.2 percent change still lingers they have to trade the pick to Philadelphia as part of the Steve Nash deal. The Lakers remain hopeful Kobe Bryant can return from his third consecutive season-ending injury, though uncertainty awaits if he can survive an 82-game season in his 20th NBA year. The Lakers also have plenty of cap space to pursue marquee free agents, though the nine vacant roster spots could lead to a lack of clarity on the team’s identity. Of course, questions persist on how quickly the Lakers can rebuild after ending the 2014-15 season with a 21-61 record, the team’s worst mark in the franchise’s 67-year-old history.

Then there marks another riddle that the Lakers have spent the past two years trying to solve. What can they expect from Wesley Johnson? As he has posted career-highs in points in consecutive seasons and impressed the Lakers with his seemingly infinite athleticism, will Johnson morph into the consistent wing scorer and lockdown defender that some on the staff liken to Michael Cooper? Or will Johnson’s inconsistency continue to follow him as it has done for most of his five-year NBA career?

“There might be a time where we have to say, ‘This is exactly who the guy is,'” Lakers coach Byron Scott said earlier in the 2014-15 season. But Scott then added, “I don’t know if that time is now,” recalling that former Lakers general manager Jerry West noted that most NBA players hit their peak between 28 and 32 years old. Johnson will turn 28 on July 11.

“If that’s the case,” Scott said, “he probably has another year of hitting that plateau of playing even better than he’s been playing.”

All of which leaves the Lakers with mixed feelings on whether they want to retain Johnson once he becomes an unrestricted free agent on July 1.

The Lakers have not given up yet on whether Johnson will continue to grow after playing multiple positions under Mike D’Antoni (2013-14) and primarily at small forward under Scott (2014-15). Scott still believes Johnson “can be one of the top defenders.” But the Lakers will put higher priority on their offseason needs through both the NBA draft and marquee free agents. Meanwhile, Johnson acknowledged “it’s frustrating” he will enter three consecutive offseasons as a free agent after signing two one-year contracts near the veteran’s minimum.

“I would love a multi-year deal,” Johnson said last week following his exit meeting. “We’ll see going into this offseason what will happen. I’m hoping for the best.”

Yet, that might become an unrealistic goal considering Johnson’s mixed success with the Lakers.

In the 2013-14 season, Johnson posted a career-high 9.1 points and showed enough versatility to play both at small forward and power forward as D’Antoni wanted. Johnson held the Clippers’ Blake Griffin scoreless in the fourth quarter of the Lakers’ season-opening win. On the same night he forced Portland’s LaMarcus Aldridge to take 19 shots to reach 21 points, Johnson also provided the game-winning basket against the Trail Blazers off an inbounds pass. Yet, Johnson appeared physically overmatched against bruising big men, such as Memphis’ Marc Gasol or Indiana’s David West. Johnson also only shot 36.9 percent from the perimeter.

Last season, Johnson averaged a new career-high in points (9.9), posted double digits in 26 games and appeared more comfortable only assuming the small forward spot. Scott credited Johnson’s improvement with his ball handling and appearing “more confident” in looking for his shot. Johnson also made a key steal on Houston’s James Harden that led to a game-winning layup. But Johnson also posted single digits in 36 other contests and did little to revamp a defense that ranked 29th out of 30 NBA teams.

“They still haven’t tapped into me,” Johnson said. “They said, ‘We feel like you’re still holding something back that we’re trying to pull out of you.’ I think there’s still some stuff left in me. I’m agreeing with them. There are times I will play and some times they still try to pull it out. They want me to be consistent with it.”

After five years of mostly hearing the same thing, why has Johnson failed to become more consistent?

“It’s hard to really just pinpoint it,” Johnson said. “If I could pinpoint it, it wouldn’t be there.”

But then Johnson suggested one specific reason as he looked back on his career that included stops in Minnesota (2010-12), Phoenix (2012-13) and Lakers (2013-present) after being selected fourth overall in the 2010 NBA Draft. He pointed to the evolving responsibilities, the latest one involving Johnson morphing from a defensive specialist to a stronger scoring role amid season-ending injuries to Kobe Bryant (right shoulder) and Nick Young (left knee).

Yet, Scott saw something else.

“Some of it has to do with between the ears,” Scott said. “But athletic wise, he’s one of the most athletic guys in this league. It’s just a matter of putting it together on a more consistent basis more times than not. With Wesley, I think he does get it. He can apply it. To what extent is the question.”

Johnson vows he will. He plans to spend his offseason improving his ball handling and increasing size and muscle to his 6’7, 215-pound frame. Johnson also said he will workout for the second consecutive summer with Kobe Bryant. Johnson had credited the Lakers’ star sharpening his aggressiveness and understanding the importance that repetitive drills helps form healthy habits.

But whenever he struggled on the court, Johnson reported Bryant often yelling, “Anaheim,” referring to where the two often trained together.

The Lakers hope he won’t either. But with Johnson completing another season with the inconsistency tag still attached to his jersey, the Lakers feel uncertain how much interest they will have in giving him another chance.

“I would love to come back. Definitely things haven’t been going like they have wanted them to, but that’s not a reason not to want to go anywhere,” Johnson said. “You want to be around when it turns around. I would love to be here.”