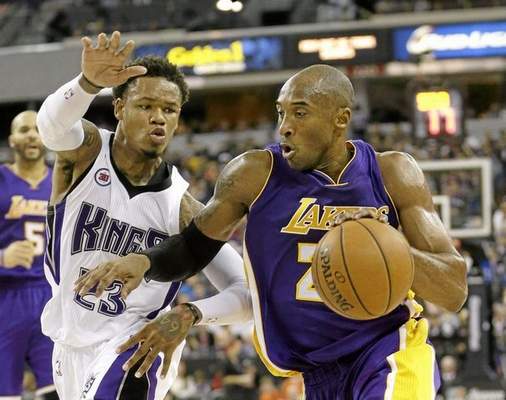 There rarely marks a time that Kobe Bryant has not shot a basketball. His high-volume scoring captures both his greatness and division to what degree that skill disrupts team play.

But after spending nearly the past five months away from the court because of a surgically repaired right shoulder, Bryant believes he could begin shooting as early as July.

“It’s going very well,” Bryant said on Tuesday about his rehab when he appeared as a guest analyst for Sina during the Chinese online company’s pre-game and post-game coverage for Game 3 of the 2015 NBA Finals on Tuesday between the Golden State Warriors and Cleveland Cavaliers. “The strength in my shoulder is getting better and better by the day. Hopefully, I’ll be shooting the ball in a month and month and a half. Then I’ll feel like a fish being put back in water.”

This usually marked a time where Bryant would compete for an NBA championship, winning the title in five of his seven Finals appearances. Instead, the Lakers finished with a 21-61 record in what marked the worst record in franchise history.

“I’m calm,” Bryant maintained. “That’s not a big deal to me. I’m pretty patient when it comes to things like that. I can sit back and watch, support LeBron [James] and support Steph [Curry] and those guys and watch good basketball. Then when my time comes, I’ll be ready.”

RELATED:
Should Lakers go big or small in the NBA Draft?

NBA Draft: Jahlil Okafor says ‘I can definitely see myself here in L.A.’
NBA Draft: Lakers yet to get Karl Anthony-Towns in for a workout