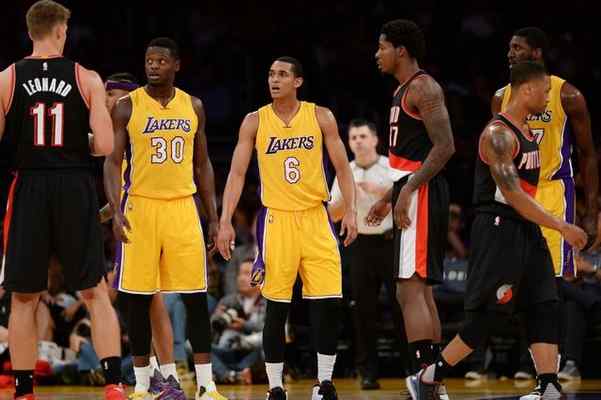 Back when the Lakers collected an NBA title seemingly every June, their California counterparts represented a mere speed bump before the championship parade. The Sacramento Kings shared some intense playoff battles with the Lakers, but the outcome always turned out purple and gold. The Golden State Warriors never could put up a fight. Neither could the Clippers, whose only similarity to the Lakers entailed sharing the same arena at Staples Center.

But amid the the Lakers finishing with their worst record in L.A. franchise history in consecutive seasons, TNT analyst and former NBA player Charles Barkley increased the blood pressure of various Angelenos that were already tense from the recent losing.

“The Lakers are the fourth-best team in California,” Barkley said in a conference call on Monday. “They’re lucky the Sparks ain’t playing, they’d be the fifth.”

The Sparks play in the WNBA, the not so subtle suggestion that the Lakers lack so much talent that they could not defeat a team even if it remained physically superior because of mere gender differences.

The skepticism surrounding the Lakers stems from their recent losing, their crop of young players and Kobe Bryant’s lack of durability in recent years. Bryant will enter his 20th season with the Lakers after suffering three season-ending injuries in consecutive years to his left Achilles tendon (April 2013), left knee (Dec. 2013) and right shoulder (Jan. 2015). And just as the question is asked, Barkley hardly minced words on Bryant’s fortunes.

“I hope it’s his last year. He’s one of the greatest players ever. I don’t want to see him out there just playing for the heck of it,” Barkley said. “He could play, but it obviously wouldn’t be the same. There’’s a reason he keeps getting hurt. His body can’t take the NBA pounding anymore. Everybody’s body gives out at some point. I just want to remember the great Kobe Bryant. I want him to come out there and play 20-25 minutes a night have a farewell tour.”

The Lakers will host some unspecified tributes for Bryant at home games. But Bryant has not ruled out prolonging his NBA career after his $25 million contract expires after the end of this season.

Said TNT analyst Kenny Smith: “I would hope if Kobe Bryant was able to play at some point and the Lakers became contenders next year….”

“They’re not going to be contenders next year!” Barkley said.

“But if they had a free agent who came in….,” Smith answered.

Smith then continued his thought.

“….And he was able to play 20-25 minutes, I would like to see him play two more years,” Smith said. “But I wouldn’t want to see him in two years in the situation that he’ll be in this year.”

Many NBA experts predict that situation will be difficult.

Lakers coach Byron Scott may believe that rookie point guard D’Angelo Russell, second-year forward Julius Randle and second-year guard Jordan Clarkson could appear in multiple NBA All-Star games. But who knows how long it will take for either three players to develop. The Lakers have veterans in Roy Hibbert, Metta World Peace, Nick Young and Lou Williams, but all are considered wild-cards. And then there’s a brutal Western Conference.

“Knowing the type of guy he is, I could see him trying to pass up Karl Malone,” O’Neal said. “I don’t really know where he is behind Karl Malone. But it’ll be nice at the end of the day if two Lakers were one and two in the scoring race.”

It seems highly unlikely O’Neal will get his wish.

Former Lakers center Kareem Abdul-Jabbar has recorded a league-leading 38,387 points, while Karl Malone trails with 36,928 points. Even if he unexpectedly played a full 82-game season, Bryant would have to average 54.23 points per game this season to eclipse Malone.

“He still has a lot left in him,” O’Neal said. “You know he’s going to be taking a lot of shots so that’s probably his only motivation at this point, to keep climbing up in the charts.”