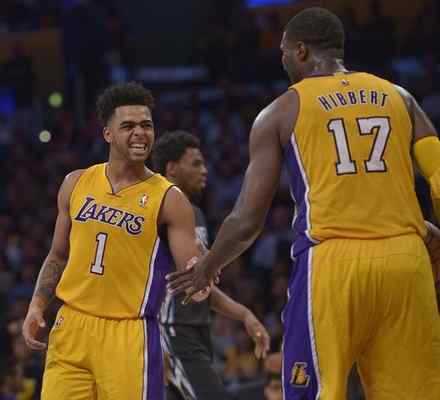 Things did not work out as planned in the Lakers’ free agent pursuits. The Lakers landed a second meeting with Aldridge after he felt the first one did not devote enough time on the basketball pitch. Monroe opted for Milwaukee. And Jordan stayed with the Clippers after initially agreeing to go to the Mavericks. The Lakers eventually acquired Roy Hibbert in a trade from Indiana.

Russell posted only four points on 2-of-7 shooting and recorded more turnovers (three) than assists (two) in the Lakers’ season-opening loss to Minnesota on Wednesday at Staples Center. Russell also played at shooting guard with diminished ball-handling duties, something that prompted Scott to revert Russell back at the point guard spot tonight against the Kings. After the Lakers passed him up in the draft, Philadelphia center Jahlil Okafor posted 26 points on 62.5 percent shooting, seven rebounds and two blocks. It was also expected Minnesota would use its No. 1 pick on center Karl-Anthony Towns, who had 14 points on a 6-of-10 clip and 12 rebounds against the Lakers.

Instead, Scott is more concerned with how Russell in matching up with Rondo and former UCLA product Darren Collison.

“He’s starting to get that every night in this league there is going to be somebody where that point guard position is pretty damn good,” Scott said. “They look at him as fresh meat. He’s a rookie. He’s young and inexperienced. So most of these guys are going to go at him. He just has to gear himself up for that and be ready to accept the challenge.”