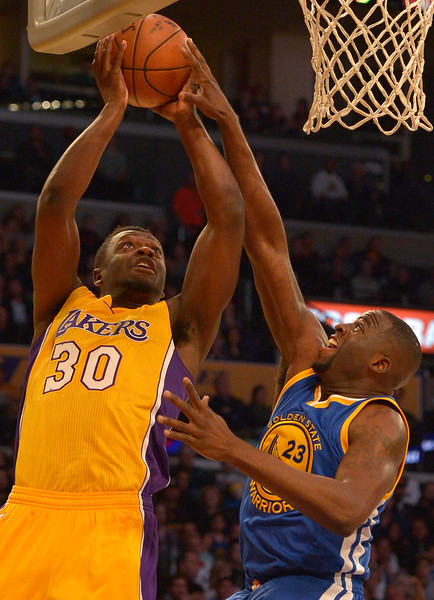 The strain of a physically taxing workout wore on Lakers forward Julius Randle as he wiped the sweat off of his face. But the Lakers wanted to make sure Randle has not felt the strain amid private and public disagreements with Lakers coach Byron Scott over his bench role, playing time and criticizing him in front both his teammates and reporters.

So as Randle walked off the practice floor, Lakers general manager Mitch Kupchak asked how he was holding up.

Randle then back to work with teammate Metta World Peace where they worked on various post and 3-point shooting drills. Moments earlier, Scott said he had a “nice little talk” with Randle about his recent public criticisms over his frustration with playing only 16 minutes in the Lakers’ win on Sunday over Phoenix. It did not help that Randle has posted a combined four points on 1-of-12 shooting, 21 rebounds and seven assists in the past two games against Phoenix and Golden State

“I have a lot of faith and believe in him,” Scott said after practice on Wednesday at the Lakers’ facility in El Segundo. “These two games aren’t an indication of how I feel about him. But there are things I have to do as a coach. I told him,
‘Every now and then, you’re going to think I’m a [jerk]. But that’s okay. That’s my job to teach you. There will be times I’ll be extremely hard on you. When we get to the point where I’m not talking to you, then we got a big problem.”

Scott reported he initiated the conversation with Randle, who did not sound thrilled that Scott singled him out privately and publicly amid the Lakers’ reserves coughing up a 35-point lead in the fourth quarter to Phoenix. Randle did not speak to reporters on Monday. But there is a sense that Randle has also become frustrated that Scott has not provided enough positive reinforcement amid his stellar performances. Randle has averaged 11.0 points and 9.5 rebounds in 26.4 minutes per game, and ranks eighth in the NBA and first among his sophomore class in total rebounds.

Although Scott praised Randle’s “energy,” Scott has consistently called on Randle to improve his mid-range jumper and defense. Scott also took issue with Randle’s outwardly frustrated reaction when he was taken out with 4:34 left of Sunday’s game against Phoenix.

“He’s young and wants to do really well, which is understandable,” Scott said of the 21-year-old Randle. “But sometimes as most young guys will, they go at it the wrong way. I want him to get back to the things we talked about it a few weeks ago, which we will and he’’l go from there.”

How was Randle’s receptiveness to Scott’s feedback?

“He was great,” Scott said. “Julius is a very respectful guy, very humble and wants to be good like most of our young guys. Everything was ‘Yes sir’ and ‘I understand.’ He asked me again what were the things he wanted me to do. I talked about what we talked about a couple of weeks ago and said that hasn’t changed. So everything’s good.”