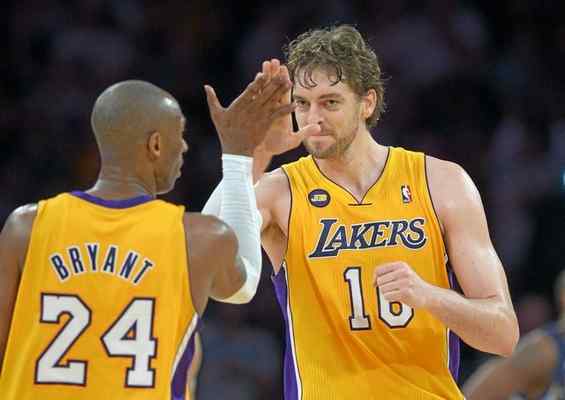 The affectionate smile formed on Pau Gasol’s face as he thought about what awaited him.

In what will mark the first time since squaring off in the 2012 Olympics, Gasol will greet Kobe Bryant as an opponent when the Lakers (9-38) host the Chicago Bulls (25-19) on Thursday at Staples Center. After spending 6 1/2 years with the Lakers from 2008 to 2014, Gasol signed with Chicago as a free agent. But Gasol and Bryant did not play against each other because of Bryant’s various injuries.

“It’ll be fun and I look forward to it. I’d love to see him on the floor,” Gasol said following morning shootaround at UCLA. “It’ll be a fun game and a special game for me for many reasons.”

There are many reasons. He still has waxed nostalgia about his 6 1/2 seasons with the Lakers that included three consecutive NBA Finals appearances and two NBA championships. Gasol plans to visit Dr. David Skaggs at Children’s Hospital Los Angeles before Sunday’s game against the Clippers. Gasol also called Los Angeles “one of the best cities in the world.”

But one of the main reasons included Bryant, who argued this week that Gasol did not become fully appreciated amid diminished roles under former Lakers coaches Mike Brown and Mike D’Antoni as well as never-ending trade speculation. The Lakers had sent Gasol to Houston on Dec. 2011 as part of the Chris Paul deal, but the NBA halted the trade.

“Some people appreciate you more. Some people don’t. Not everyone is going to appreciate you the same way,” Gasol said. “That’s something you have to live with and that’s what happens to all of us. But there were a lot of people that appreciated me and Kobe was definitely one of them.”

Gasol sensed Bryant’s appreciation quickly after the Lakers acquired Gasol from Memphis on Feb. 2008 for Kwame Brown, Aaron McKie, Javaris Crittenton, two first-round picks and the rights to Pau’s brother, Marc. Gasol reported that he talked with Bryant extensively before and after he landed in Washington D.C. to join the Lakers in the middle of their annual Grammy trip.

“He was definitely excited to have me on the team with my skillset, IQ and with the way I approach the game,” Gasol said. “We were a perfect fit for that team. We had a good opportunity and took advantage of it.”

While Bryant still led the Lakers with high-volume scoring and a demanding personality, Gasol provided versatility with efficient post-work and passing with an agreeable personality. The two also bonded over mutual interests, including soccer, traveling, reading and movies. While Gasol grew up in his native Spain, Bryant spent a majority of his childhood in Italy where his father played basketball professionally.

“He’s definitely very smart, intellectual and reads a lot,” Gasol said. “He’s a guy you can pretty much talk about anything. His education and experience in his life has a lot to do with it.”