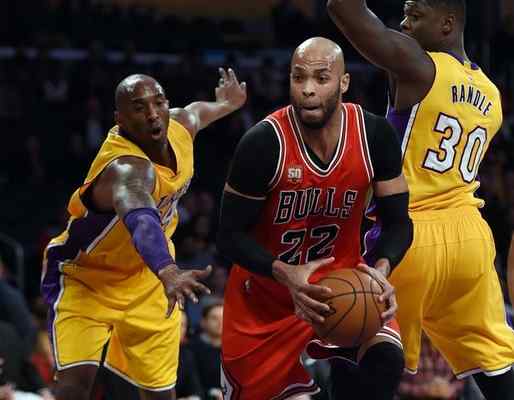 The Bulls’ Taj Gibson drives to the hoop between the Lakers’ Kobe Bryan, left, and Julius Randle on Thursday night. (Photo by Hans Gutknecht/Staff Photographer)

The Lakers will have to weather another game without Kobe Bryant, who will sit out when the Lakers (9-39) visit the Clippers (30-16) on Friday at a designated road game at Staples Center.

Lakers coach Byron Scott initially stressed Bryant has nothing to do with the soreness in his right shoulder and right Achilles he has nursed in recent weeks.

“His shoulder feels pretty good,” Scott said following morning shootaround on Friday. “It’s just the back-to-back right now. We want to rest it and get ready for this next long stand of road games we have coming up in February before All-Star break.”

But the Lakers have since clarified and said Bryant’s sitting out because of his sore right shoulder.

The Lakers have home games on against Charlotte (Sunday) and Minnesota (Tuesday) before starting a four-game, eight-day trip that includes stops in New Orleans (Thursday), San Antonio (Saturday), Indiana (Feb. 8) and Cleveland (Feb. 10). NBA All-Star weekend then takes place from Feb. 12-14 in Toronto where Bryant plans to play in his 18th and final All-Star appearance as a starter.

Does this mean Scott will plan to rest Bryant on the Lakers’ six remaining sets of back-to-back games?

“Not all the time, but I anticipate it will be more often now, Scott said. “The season is getting a bit longer in the tooth. It’s on that countdown. The more we play back-to-back games, the more chances that he sits out on those second night or first night.”