And with money and resources not yet in place to build one adequate stadium – and the A’s and Raiders adverse to sharing a facility – appeasing one might mean losing the other.

And that’s been a key issue trying to move forward an ambitious plan to re-develop the 120-acre complex on which the Raiders and A’s currently share the O.co Coliseum with homes, hotels, and restaurants, among other features.

The A’s have a 10-year lease at the Coliseum and the Raiders are expected to re-up for one more season, buying each time to see where things move from here.

The A’s are on record saying they want nothing to do with a shared stadium, and their long-term lease gives them incredible leverage. Either they get a new stadium that suits their needs, or they stay right where they are until they do.

However, the city of Oakland is getting antsy trying to move on with plans to develop the sprawling East Bay area, and Mayor Libby Shaaf hopes to ignite the process by asking both the A’s and Raiders to submit individual stadium plans for the proposed development.

Schaaf’s plan also would extend the city’s exclusive negotiating agreement with its hand-picked development team headed by Floyd Kephart. The San Diego-based businessman has been working on financing a new football stadium as part of Oakland’s proposed Coliseum City project. But the 90-day extension, expected to receive City Council backing on Tuesday, would come with a condition that the two teams are free to offer competing plans.

As Matthew Artz wrote in the Contra Costa Times, while the move is intended to placate both teams, it will also mean pitting one against the other.

With the clock ticking on the development – and Los Angeles looming as a landing spot for the Raiders – it will be interesting to watch how all this unfolds.

If Shaaf’s plan gets approval, and the Raiders and A’s agree to submit plans, it will be fascinating to see who local leaders side with.

With the A’s playing a minimum of 81 home games per season and the Raiders a minimum of eight – 10 if you include preseason – it stands to reason the more consistent money generated from 81 game game days in which fans are eating and drinking at the nearby restaurants and bars might be more attractive to city leaders.

Not saying local leaders would rather keep the A’s over the Raiders, but if keeping one over the other comes down to money, the decision might not be a hard one.

How can Los Angeles expect to attract a football team when it hasn’t built a football-specific stadium in 92 years?

That is the question posed by St. Louis Post-Dispatch columnist Bernie Miklasz, in this piece arguing that Rams owner Stan Kroenke is giving up too quickly on the city that is in discussions to build its second football stadium since 1995.

The Rose Bowl was constructed in 1922, the Coliseum in 1923. The Rams played at Angel Stadium their final 14 years before moving to St. Louis, but that was a venue built for baseball in 1966.

Micklasz also questions Los Angeles’ ability to support an NFL team once the novelty wears off. St. Louis has finished in the bottom three in average attendance each of the last five years, but it has been a gradual drop-off since the team’s last playoff season 10 years ago.

One year after making the playoffs for the fifth time in six seasons, the L.A. Rams finished in the bottom three in average attendance for two consecutive seasons before posting a league-worst figure in 1994, the final season before moving to St. Louis.
END_OF_DOCUMENT_TOKEN_TO_BE_REPLACED

How close is Los Angeles to landing an NFL team? Much closer than it was 10 days ago.

How did we get here? Here is a timeline of events.

Dec. 16, 2014: The San Diego Chargers do not exercise a yearly termination clause in their lease with Qualcomm Stadium, meaning the team will remain in San Diego for at least the 2015 season.

Dec. 23, 2014: NFL commissioner Roger Goodell informed the Rams, Raiders and Chargers that no team will relocate to L.A. for the 2015 season.

Jan. 4, 2015: Hollywood Park Land Company officials unveil plans for an 80,000 seat stadium in Inglewood at the site of the former Hollywood Park Racetrack. Later that night, it’s discovered that Kroenke is a partner in the project, adding significant legitimacy to a potential return to L.A. for the Rams. 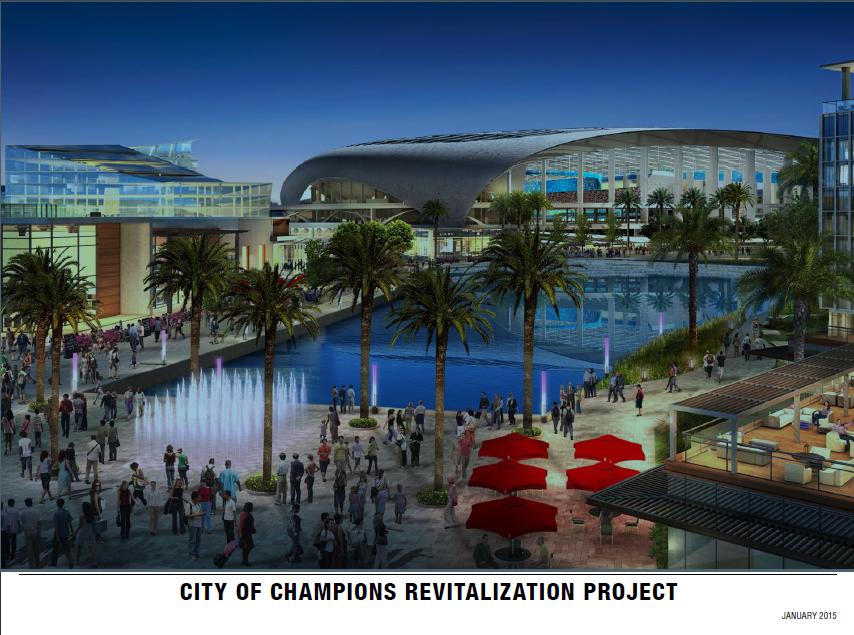 Rendering of the plan for Inglewood site.

Jan. 5, 2015: After the Lakers relocated from the Forum to Staples Center in 1999 and Hollywood Park closed in 2013 Inglewood celebrates the stadium proposal that includes 3,000 housing units, a hotel, movie theaters, a 10-acre central park with a lake, and shopping districts. 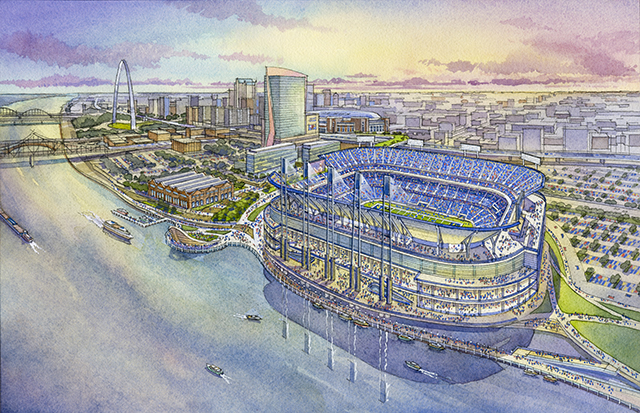 A rendering of the 64,000-seat stadium on the banks of the Mississippi River proposed by St. Louis in an effort to keep the Rams from moving to L.A.

Jan. 9, 2015: In response to the St. Louis stadium proposal, the Rams release a statement that doesn’t exactly scream excitement.

Jan. 13, 2015: Despite needing 24 of the 32 NFL owners to approve a move to Los Angeles, Dallas Cowboys owner Jerry Jones astonishes St. Louis officials by telling the New York Times it is possible to move without league approval.

Jan. 16, 2015: Despite an assurance to the contrary when the Inglewood stadium complex was proposed, a 187-page outline released by the developers reveals that up to $100 million in tax money could be recouped, a loss of credibility that could compromise voter approval of the project.

So let me get this straight, private financer propose to build a brand new football stadium Inglewood – presumably to be the new home of the Los Angeles Rams – and are asking no upfront tax money from local residents.

But wait, it turns out the financers wrote into the proposal a multi-million dollar pay out to themselves if annual tax revenue to the city from the completed project exceeds $25 million as expected.

Should that happen, the developers, including a company controlled by Rams owner Stan Kroenke, would be entitled to reimbursements for funds they invested in streets, sewers, parks and other projects deemed dedicated to the public. And that pay out could be as much as $100-million dollars.

And now all of a sudden people have some misgivings, even accusing the developers of getting cute with their words while trying to line their pockets.

I have a bit of a problem with that accusation.

Unless something comes forward indicating upfront public money is required, Kroenke and his group have been honest thus far on that aspect.

More importantly, if Kroenke and his group are putting up all the money, why shouldn’t they recoup some of their investment once certain thresholds are met in terms of tax revenues to the city of Inglewood?

If the city makes money, the investor makes more money.

Isn’t that the very definition and goal of investing?

Sounds to me like people are making a big deal out of nothing on this one.

How close was former Seahawks owner Ken Behring to moving the team from Seattle to Los Angeles in 1996?

Moving vans had already hauled some of the team’s equipment to California before Paul Allen purchased the team on the condition CenturyLink field be constructed in Seattle.

If a vote for a new stadium in Seattle didn’t pass by a razor thin margin in 1997, the current defending Super Bowl champions would be L.A.’s NFL franchise. It was the promise of a Seattle MLS franchise in 1997 that pushed the vote through by a 1 percent margin, according to this story in The Guardian.

Allen’s attempt to pass a vote approving $300 million of taxpayer money toward a new stadium for a middling franchise wasn’t particularly popular at the time, considering he was the seventh-richest man in the world. It wasn’t until a soccer fan called his office and pitched the idea for a stadium that could house both soccer and football that the campaign swung.

The vote that approved CenturyLink Field in 1997 and prevented the Seahawks’ move to L.A. passed by a 51 to 49 percent margin.
END_OF_DOCUMENT_TOKEN_TO_BE_REPLACED