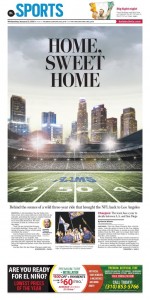 e day began with such promise for Inglewood and Rams fans. But the tide quickly turned on Stan Kroenke and Co.

Was it a negotiation tactic? Political maneuvering? Who knows. Better yet, who cares?

Before the day would end, the NFL owners would approve 30-2 to move the Rams back to L.A. That’s not all– the Chargers might be coming as well. Reaction to this news quickly spread through social media. Sports columnist across the country also chimed in. Politicians got in on the mix as well. Of course, not everyone was excited with the move.

LA Rams fans did not care what those people were saying. They gathered at Hollywood Park and wore their vintage gear to celebrate. The fact their new team is not a good one, doesn’t take away from their day of jubilee.

Their NFL drought is over. The Rams are back in L.A.