Above: Peter Vagenas, center, chats with David Beckham as Chris Albright, right, listens before a match against Chelsea FC.

The longest tenured player with the Galaxy this season, having been with the club since 2000, Vagenas appeared in 14 games this season, making 11 starts, tallying one goal and adding three assists.

A native of Pasadena, Vagenas played four years at UCLA, winning a national championship in 1997, before being drafted by the Galaxy in the second round (23rd overall) of the 2000 MLS SuperDraft. He would go on to play nine seasons with the Galaxy, helping the club win five titles, including two MLS Cup championships.

I’m not sure why the Galaxy didn’t protect him from the expansion draft. These days, the Galaxy seems to have no clue as to what they’re doing.

Remember when they fired Sigi Schmidt even though the Galaxy was in first place? And look at Sigi now … He just won another MLS Cup, ironically named the Philip F. Anschutz who happens owns the Galaxy.

BTW, I was at the game where Beckham, Venegas and Albright are pictured below. That was just before the start of the Galaxy-Chelsea match. It was a chaotic scene down there as I watched from the press box. Hope you all had fun watching Beckham last year. I take it Beckham’s favorite song is now, “I say goodbye (America), and you (AC Milan) say hello.” 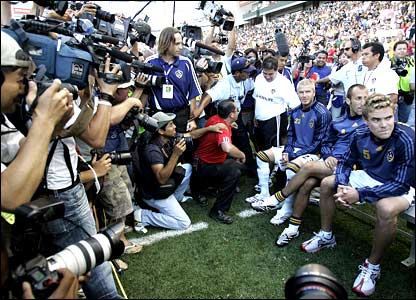 Above: Beckham, Venegas and Albright are swarmed by a throng of media in Beckham’s first game with the Galaxy.