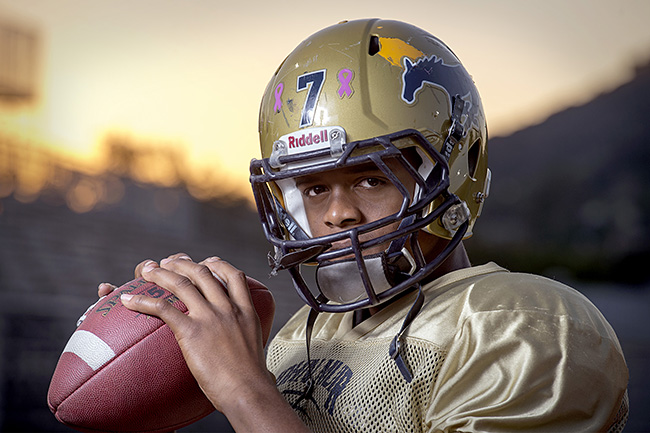 PASADENA – Muir High School has recovered from a slow start to become one of the top football teams in the CIF-Southern Section Southeast Division.
A big key for the Mustangs, who have won six consecutive games going into Thursday’s 59th Turkey Tussle against rival Pasadena at the Rose Bowl, is wide receiver Lamarr McDaniels.
The senior, along with quarterback Joshua Muema-Washington, have been the glue that has kept Muir, ranked No. 4 in the Southeast Division, together.
“He’s (McDaniels) one of the guys that kept the drive,” said Muir coach John Hardy, whose Mustangs are 6-3 overall and 6-0 in the Pacific League. “When we were 0-3 after losing to Rancho Cucamonga, we had a team meeting and he was one of the (players) who called the team meeting.
“It was (McDaniels and Muema-Washington). They kept our kids in the right frame of mind. I think that’s why we are where we are right now.”
McDaniels’ view is that something needed to be said after Muir opened with consecutive losses to Upland (34-6), Alemany (49-12) and Rancho Cucamonga (54-14).
He had high expectations after Muir advanced to the divisional semifinals last season, and was going to make sure the players righted the ship.
“We did just put it aside,” McDaniels said. “We decided that we didn’t want to lose anymore. That’s what we are doing, we’re not going to lose anymore.”

The Mustangs, behind the play of Muema-Washington and McDaniels, haven’t.
They’ve turned around their season after getting into the comfort zone of the Pacific League and have cruised to at least a share of the league crown going into Thursday’s game.
Muir outscored four of their six league opponents, 132-0. They also have close victories over Burroughs (21-14) and Burbank (24-17).
McDaniels, who was All-Pacific League last season, had a touchdown reception in a 38-0 victory over Arcadia last week, and had a big game with 72 yards receiving in a 63-0 win over Hoover.
The senior was not an overnight success. He, like so many kids his age, had to work his way to become one of the better receivers in the area.
“It’s about where he started from and where he’s at now,” Hardy said. “He came in not knowing what he wanted to do football-wise. Over the three years of effort, I’ve seen him grow as a young man.
“He’s not just a good football player. But he’s getting his grades in, and I’m just proud of him. He’s come a long way. He had two left feet when he started, now he’s one of the best players in the area, in my opinion.”
McDaniels’ rise up the success ladder hasn’t gone unnoticed. He’s getting some recruiting interest from New Mexico, San Diego State, Idaho and Nevada.
“I’ve been talking to those coaches,” McDaniels said.
A big key for his success is also his relationship with Muema-Washington, who has been a guiding influence during their careers at Muir.
“Josh is a smart quarterback,” McDaniels said. “He makes some big plays. I enjoy playing with him. I’ve been playing with him since we were on the (junior varsity).
“I’m looking forward to finishing my senior year with him.”
But first both have some unfinished business to take care of Thursday – the Turkey Tussle against Pasadena.
Muir hasn’t lost to its rival since 1995 and leads the overall series, 39-17-2.
“I believe we are going to come out (Thursday) and play hard,” McDaniels said. “I believe the first quarter we’re going to come out and dominate. I don’t believe we can lose.
“We’re going to play all four quarters hard and walk away with the (Victory) Bell.”