Here’s a short video clip from Friday’s game. Due to the deadline, I didn’t have time for post-game interviews, but wanted to show a little bit of the game, especially what the fog looked like.

SAN DIEGO – There will be no CIF State football championship-game appearance for Rio Hondo Prep.
But the Kares were oh-so-close.
Jerry Harper scored on a 1-yard run with 2:20 left in the fourth quarter and Hunter Vaccaro rushed for 181 yards and two touchdowns as Santa Fe Christian ended Rio Hondo Prep’s dream with a 30-28 victory in the South Region Division IV Bowl at Del Norte High School.
The Eagles, also getting two touchdowns from Harper, improved to 11-3 and will face Central Catholic of Modesto – which beat McClymonds of Oakland 42-12 – in the Division IV Bowl on Friday at 4 p.m. at Home Depot Center.
Rio Hondo Prep, getting 127 yards rushing and a touchdown from Ty Loomis and 169 yards passing and a touchdown from Colby Rivera, finished 12-2.
The Kares, without running back Nate Tayco – who was injured in last week’s 28-21 victory over Mission Prep in the Southern Section Northeast Division championship game – had one last chance. But Slater Howe intercepted a tipped pass at the Santa Fe Christian 44 with just over a minute to play.
“I’m proud of my guys,” Rio Hondo Prep coach Ken Drain said. “They played like we have all year, it just came down to one play. We needed to tackle the guy (Vaccaro) one time, and we missed him.”
The play in question came late in the fourth quarter after Rivera scored on a 1-yard sneak for a 28-24 lead with 5:44 left.
Santa Fe Christian then faced fourth-and-3 from the Rio Hondo Prep 45 with just over three minutes to play. Vaccaro, as he showed all night, cut back from a tackle and ran 37 yards to Kares’ 8.
Tony Miro, who rushed for 71 yards, took an inside dive to the 1 before Harper swept in from there for the 30-28 lead with 2:20 to play. The PAT kick was blocked.
Rio Hondo Prep utilized its usually physical offense, with some trickery, to take a 21-14 lead in the first half.
The Kares, who scored more than 500 points during their first 13 games, looked like they might run away with the game, scoring back-to-back touchdowns early in the second quarter for a 14-0 lead.
They went 85 yards on their second possession. Loomis had runs of 20, 11 and 8 yards to the Santa Fe Christian 5 before going up the middle from there for a 7-0 lead on the second play of the second quarter.
The Kares then caught the Eagles napping, using a flea-flicker for a 59-yard pass from Rivera to Jake Holguin for a 14-0 advantage with 8:47 left in the half.
But Rio Hondo Prep pushed its luck a bit too far, trying an onside kick that the Eagles recovered on their 46. Vaccaro then burned the Kares, sweeping 45 yards on a keeper to make it 14-7.
The Eagles tied it after forcing a fumble on the Rio Hondo Prep 48. Harper had a 21-yard run to the 20 before Vaccaro followed with a 19-yard run make it 14-14 with 53 seconds left in the half.
The Kares weren’t quite finished.
Holguin and Loomis had runs of 14 and 11 yards to the Eagles’ 26 before Rio Hondo Prep took one last crack at the end zone. This time Rivera threw a backward pass to Holguin, whose Hail Mary attempt was tipped in the end zone before Christian Torrico grabbed it for a 21-14 lead as time expired.

Keith is on vacation this week, so as an added feature, I thought I would pick all five CIF South Region bowl games, including going with Monrovia over Madison and Santa Fe Christian over Rio Hondo Prep. 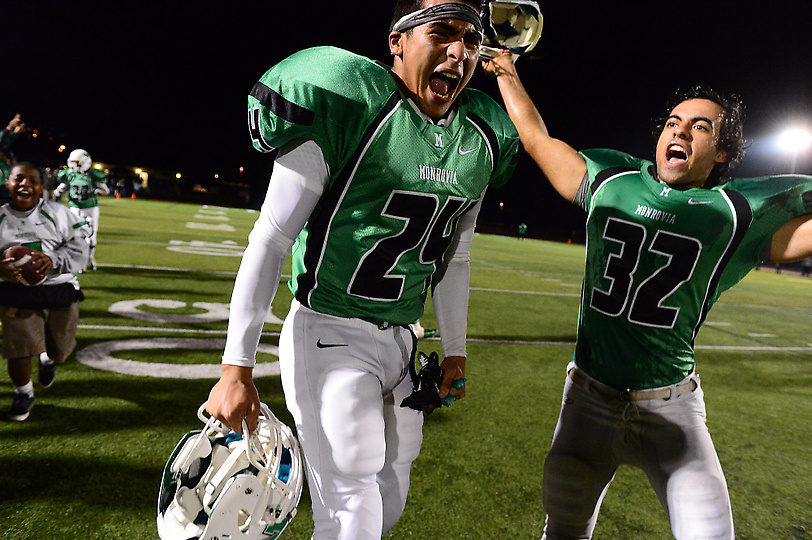 STATING THEIR CASE: Did Monrovia deserve the nod over Wasco? Yes, when you take the bias out and examine the facts.
Staff photo by Sarah Reingewirtz

Of the 20 teams selected to play in this weekend’s CIF State regional bowls, no choice was more controversial than Monrovia getting one of the two bids for South Region Division III. The Wildcats will host Madison, of San Diego, in the South Division III Bowl on Saturday at 7:30 p.m.
It basically came down to the Wildcats or Wasco, which is near Bakersfield, which went 13-0 and won a Central Section title. Monrovia is 12-2 and won its third consecutive CIF-SS Mid-Valley title.
Wasco AD told the Bakersfield Californian that “it’s a sad day for small, rural communities throughout the state of California. We won everything outright, and it means nothing.”
But in reality, this came down to strength of schedule, and at the end of the day, Monrovia’s slate, especially what it had to do over the final two weeks made the Wildcats the obvious choice.
Wasco went 13-0 while facing teams that compiled a 74-72 record. The Tigers faced two teams with at least 10 wins. Monrovina, meanwhile, went 12-2 against teams that compiled a 89-70 record. The Wildcats faced four teams with at least 10 wins, including two with 11 wins (San Dimas and Sierra Canyon) and one with 12 victories (Paraclete).
The procedure CIF uses for picking teams are only section champions are eligible and uses the criteria of strength of schedule (your opponents’ combined record), record, head-to-head, if it applies, and common opponents, if any apply. In this case, you can throw out head to head since the teams did not play, and common opponents since both come from different sections and played teams within their section. That leaves record, which Wasco wins and strength of schedule, which Monrovia wins (8.8-4.4, if you go by Cal Preps’ schedule ratings). I personally think officials looked what Monrovia had to do the past two weeks as opposed to what Wasco did in its championship game. The Tigers beat a team, Bakersfield Christian, 29-22 for its section title. They beat that team, 49-10, earlier in the season. Monrovia, on the other hand, beat Cal Hi Sports’ Division IV No. 1 Sierra Canyon (42-31) and Division III No. 1 Paraclete (23-7) by a combined 27 points. Those are two impressive wins that could not be overlooked, and are likely what pushed the Wildcats in. 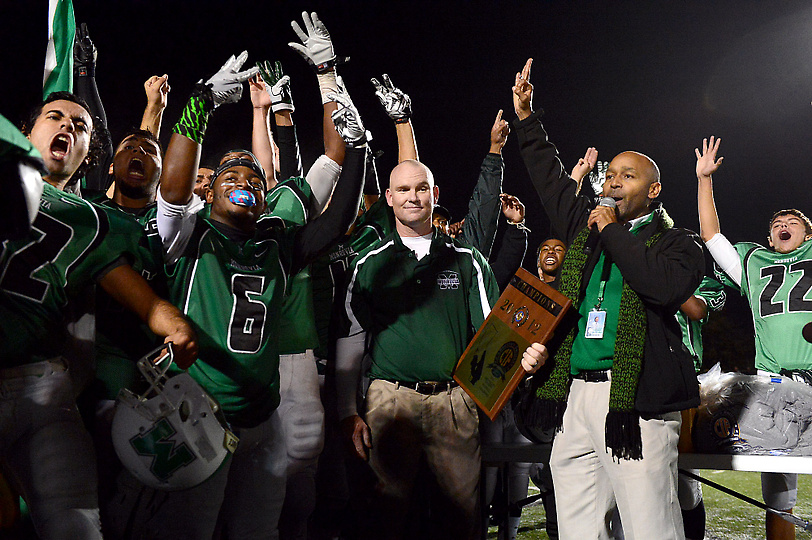 MARCHING ON: Monrovia, after 3-peating in the CIF-SS Mid-Valley Divsision, looks to add to its already historic season.
Staff photo by Sarah Reingewirtz

By Aram Tolegian
Monrovia High School football coach Ryan Maddox had little time to celebrate his program’s third consecutive CIF-Southern Section Mid-Valley Division championship.
He had more important things to do Saturday, like drive to Escondido to scout an opponent his team may or may not play in a bowl-game qualifier this week. Turns out, it was a good call.
When Monrovia hosts Madison (12-1) of San Diego on Saturday night, Maddox should have his team well-versed in what an unfamiliar opponent like the Warhawks likes to do. The winner plays either Marin Catholic (13-1) or Sutter (13-0) next Saturday in the State Division III bowl game at Home Depot Center in Carson.
“We actually went down on Saturday morning and watched Madison play against St. Augustine,” Maddox said. “We watched it and filmed it. We didn’t know for sure that we were going to be chosen, but there was a chance that we were so we went down and scouted them.
“I guess we didn’t have to go because we were going to exchange films, but you get a chance to go see them live and get a feel for the speed and the size. There’s a lot of stuff you can see live that you can’t necessarily pick up on film. It’s hard when you know nothing about the teams they play.”
END_OF_DOCUMENT_TOKEN_TO_BE_REPLACED

The second annual Chris Rix “Christmas Football Combine” scheduled for Saturday, Dec. 15 at Maranatha High School from 10 a.m. until 2 p.m.
Rix, who starred at quarterback for Bishop Amat and Santa Margarita high schools and later played for Bobby Bowden at Florida State, is a college football and NFL analyst for Fox Sports. But he has maintained his ties in the San Gabriel Valley, where he continues to mentor several of the area’s top quarterbacks.
The Christmas Combine is comprised of two divisions, the “Top Guns” division for high school and college players, and the “Young Guns” division for players ages 7-13.
“Whether your team’s season ended in early November or this past Saturday, this will be one more chance for passionate football players of all levels to compete one more time on the field before Christmas,” Rix said.
The camp is free for participants who bring a new unopened toy or Christmas gift (Between $25-$40) that can be donated to a shelter or needy family.
Otherwise, the camp is $40 for prior registration and $50 on the day of the camp, and includes a shirt. There are discounts for larger groups. To register early or ask questions, call 626-581-7016 or email championOrganization@live.com.