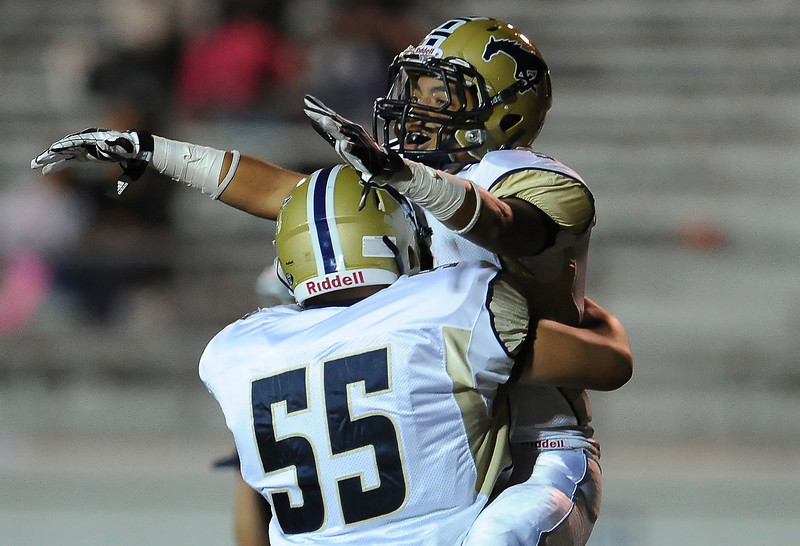 Muir came into Pacific League play as the prohibitive favorite, and the Mustangs showed why Thursday, routing host Hoover, 35-3, at Glendale High School.
Quarterback Dejon Williams accounted for two touchdowns to lead the Mustangs (3-1, 1-0), who led 13-0 at halftime. Muir held Hoover to 31 yards, and a minus-2 yards rushing. The Mustangs won despite having 212 yards in penalties.
Muir coach John Hardy: “There were a ton of penalties and a ton of mistakes,” Hardy said. “It’s hard to get a grip on it. It was a short week; I don’t know. We didn’t look like a well-coached team at all. … We did have some penalties we need to clean up. There were things we need to fix. If we do not fix them, we will have problems deeper in league.”
Defensive lineman Jasper Iheoso: “We worked hard. There were a couple of plays we could have done better on execution. But it’s all the same effort at the end of the game.”
OTHER SCORES
Rio Hondo Prep 50, Kilpatrick 6
Nate Tayco scored three touchdowns to lead the Kares, who improved to 3-1.
Pasadena Poly 34, Brentwood 27
Carter Griffin scored three touchdowns as the Panthers (3-0) survived a late rally to stay undefeated.