Friday was all about taking care of business, and St. Francis, Muir and La Salle all did their part. For the Golden Knights and Mustangs, it sets up huge games next week for a chance at their respective league titles.
St. Francis will be at state-power Serra in arguably the game of the year, while Muir can all bu wrap up its second consecutive Pacific League title by beating second-place Crescenta Valley at Glenalde.
For the Lancers, it puts them one game away from clinching a share of their second consecutive Del Rey League crown, which they can get with a win at Cantwell.
But coach Russell Martin was a little displeased with his special teams, who made two crucial mistakes that allowed Bishop Montgomery to nearly rally back from two 17-point deficits before losing, 31-28.
La Salle coach Russell Gordon: ‘Our special teams played below average tonight. I’m not happy with that, or satisfied. We just have to get back to work, get ready for Cantwell, and we have (to win) two more games before we can repeat.”
La Salle quarterback Will Pyburn (who accounted for 124 yards and two TDs): “We started real strong. We had some turnovers that killed us. I’m glad we got the win. I’d rather win ugly than lose pretty.” 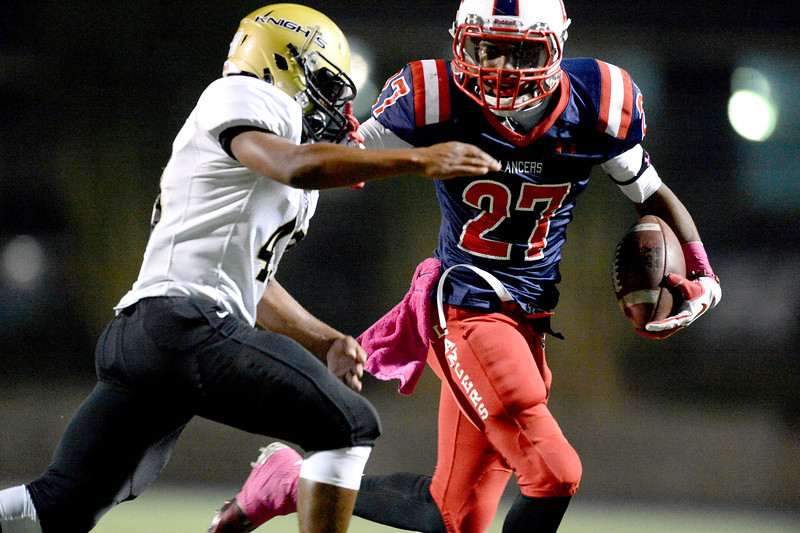 HOW THE TOP TEN FARED
1. St. Francis (8-0) def. Harvard-Westlake, 44-14 — The Golden Knights are to their best start since LBJ was president. They did it with the usual suspects as Joe Mudie rushed for 220 yards and two TDs, and QB Ty Gangi threw for 134 yards and two scores. St. Francis now preps for a titanic match at Serra, which is also 8-0 and ranked No. 1 Southern California D-II by Cal-Hi Sports.
2. Monrovia (7-1) def. La Canada, 77-0, on Thursday — The Wildcats have opened Rio Hondo League play by outscoring the opposition, 177-0, in three games.
3. Muir (7-1) def. No. 9 Arcadia, 48-7 — Dejon Williams threw for 172 yards and two TDs as the Mustangs set up a battle for first with Crescenta Valley, which beat Hoover, next week. The Mustangs clinch a share of the Pacific League crown with a victory.
4. Rio Hondo Prep (6-1), at Firebaugh today — The Kares are a solid favorite vs. Firebaugh, with a win setting up a title bout at Pasadena Poly next week.
5. San Marino (7-1) def. Blair, 72-0, on Thursday — The Titans scored in the 70s for the second this season and scored at least 60 points for the fourth time. When do they face Monrovia? In two weeks, my friends.
6. La Salle (6-2) def. Bishop Montgomery, 31-28 — Will Pyburn accounted for 124 yards and and two TDs and Bryce Harvey and Milan Acquaah rushed for 100 and 99 yards, respectively moved a step closer for a second consecutive league title, but it was a lot closer than it needed to be, thanks in part to a pair of special teams’ mistakes.
7. Pasadena Poly (6-0) at Chadwick on Saturday — The Panthers can set up a showdown with Rio Hondo Prep with a win.
8. Rosemead (7-1) def. El Monte, 45-0 — Matt Koffler shows he still has it as the Panthers win the their seventh consecutive game. The win puts them on course for that title showdown vs. Arroyo in two weeks. But first they’ll have to deal with Gabrielino, which routed South El Monte.
10. Maranatha, idle — The Minutemen took the week off, but will host Whittier Christian next week with title hopes on the line.
OTHER SCORES
Schurr 47, Alhambra 0 — The Moors comeback to earth after beating Keppel last week
Burroughs 38, Pasadena 0 — Another rough outing for the Bulldogs
Duarte 20, Sierra Vista 15 — A big victory for the Falcons, who keep their slim playoff hopes alive. They’ll need to beat Bassett next week.
Temple City 48, South Pasadena 13 — A big victory for the Rams, who have the inside track for a playoff spot
Paraclete 62, Marshall 7 — Paraclete looks the read deal again