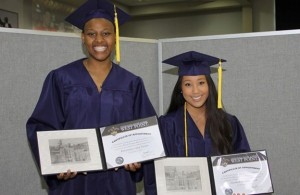 La Salle High School senior Renaissance Forster will take her volleyball skills to the U.S. Military Academy at West Point.
She was offered an athletic scholarship at the Naval Academy in Annapolis, Md., but chose the academic scholarship a Army. The middle blocker plans on trying to compete for a spot on the team as a walk-on.
Forster, an honor student, said she will study medicine.
Fellow La Salle student Elizabeth Lynch will also attend Army. She was on the cheerleading squad.