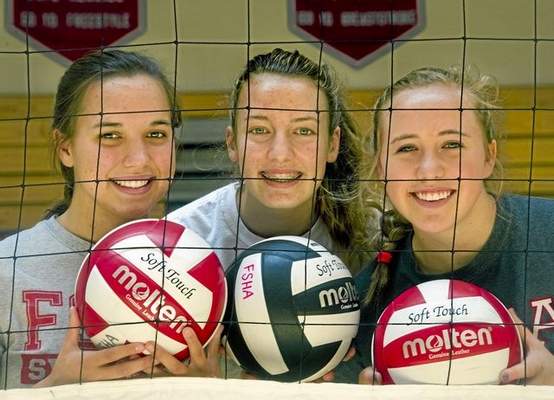 1. Flintridge Sacred Heart
The Tologs return five players who contributed heavily to the team’s CIF-SS semifinal run last year.
But coach Ernest Banaag still has questions.
“We are a lot younger that last year,” he said. “We do have a lot of experience and core knowledge.
But we’re young and that might show in some games.”
The Tologs graduated six seniors from a team that went 26-5 and lost to eventual division champion La Salle in four tough games in the semis. They return four seniors, four juniors and two sophomores who all played. Two freshmen will play this season.
“They have a lot of club experience within their age group, but they are 14-year olds now competing against 18-year olds,” Banag said.

Seton Hall-bound Sophia Coffey returns at setter, Megan Bacall is back in the middle for her senior season and outside hitter Kayla Lund has improved after a wildly successful freshman campaign.
“Sophia is huge for us right now,” Banaag said. “We have a young core of girls and with a senior setter she can help everyone gets experience. You could not ask for a better leader.”
Banaag said Lund has begun to play smarter.
“She’s not just swinging,” he said. “She’s starting to understand not to go bombs away at certain times. Hitting at 80 percent can be just as smart. She’s still fearless.”
Senior Emily Develle returns at libero and junior Ali McCollum steps in at opposite. The two freshman, outside hitter Ellis Dejardin and defensive specialist Katherine Lund, are expected to see playing time.
The Tologs move into the new Mission League, which includes Marymount and Marlborough. The league moves into the CIF-SS top division, 1AA.

2. Mayfield
The Cubs felt slighted after not being selected to the CIF State playoffs last year.
Mayfield went 24-2 last season, losing to Whittier Christian in the CIF-SS 2A title game. But a call to participate in the state tournament never came.
“We learned a lot last year by missing that state bid,” coach Jon Basilio said. “We really focused on quality, not quantity.”
The Cubs have put La Salle, La Canada, Notre Dame Academy on their schedule. They were invited to play in the Nike Tournament of Champions in Arizona. The Prep League also jumping to the 2AA division.
“The expectations are pretty much the same as the three years I’ve been here, and that’s to not necessarily concentrate on wins-losses,” Basilio said. “I don’t necessarily know a lot about our division, but it means more consistent competition. The Prep League being a group of small private schools, a lot of times we fly under the radar. We know as coaches how competitive we are and that we are playing a high quality of volleyball.”
Six players who saw a lot of playing time return; junior Charlotte Watkins at outside hitter, junior Sarah Johnson at libero, senior Cailin Beadles at setter, juniors Madison Forrest and Faith Doney at middle blocker and sophomore Andrea Raymundo, who will also set. The Cubs also add freshman middle blocker/opposite Claire Forrest and freshman all-around player Tori Ashkinos.
3. La Salle
The two-time reigning CIF-SS 1A champions have big holes to fill because of graduation.
It became bigger when senior outside hitter Haley DeSales, the two-time Pasadena Star-News player of the year heading for Washington State, tore her ACL in the spring. She will be on the bench and a team captain for the season, but is not expected to play until at least February. Then, it might be just as a server, and it won’t be her lethal jump serve, either.
“It’s been very different,” coach Tiare Tuitama said. “We do not have any superstars and we’re working for people to fill roles.”
The Lancers do return senior Alyssa Tavera, arguably the craftiest setter in the San Gabriel Valley.
Tuitama said the Lancers will have more of a beach volleyball feel this season, especially with their power players missing.
“I’m really excited as a coach because we need to make the technically wiser,” Tuitama said. “Eventually we’ll get there.”
Junior opposite Lauren Rewers is close to returning after tearing her ACL last season. Junior Jenny Haderlein has become the go-to hitter and junior Katherine Knop goes from defensive specialist to libero. The Lancers welcome freshman Sophia Anderson and two sophomores, 6-0 Ravin Rhodes and Emily Wasson and senior Lea Bruder.
La Salle makes the jump from the 1A division to the CIF-SS top playoff division, 1AA.

4. St. Lucy’s
It will be a big year for the Regents to prove themselves.
Setter Juliet McClure returns to start her third and final season and junior opposite Loryn Carter senior middle blocker Rachel Cavanaugh return.
But as far as the big names of the past, they’re gone.
“We lost a lot of experience, but we have a lot of young, hungry girls,” St. Lucy’s coach Sean Douglas said. “We were used to seeing the same faces the last two years. But we have had six and six turnover the last two years. The good thing is that these girls do not know any better and it’s been great to see them go out and compete. We’re going to surprise some teams.”
Sophomore Brennan Miller has become a factor at libero and sophomore Julianna Rohrer will lead the defense. Junior outside hitter Francessca D’Aquila has made big gains this summer.

5. St. Paul
The Swordsmen are hungry for more. They advanced to the CIF-SS Division 4AA semifinals last year and with its current cast, those fortunes could improve.
“We have a core four back,” coach John Van Deventer said. “Most of our core players are way better than last year. We will be scary good. Last year left a bad taste in the girl’s mouths and they want to go all the way back. We can’t overlook anything.”
Senior setter Jillian Saenz, junior libero Katie Engle, senior outside hitter Riley Kelly and senior Marissa Aguilar, all starters, return. Senior opposite Cheyanne Little transferred from Western in Anaheim, although she did not play last season because of an injury. Freshman Hannah Tostado, a 6-0 middle blocker, is expected to start.

6. Whittier Christian
The two-time reigning CIF-SS Division 2A champions lost eight seniors, including Whittier player of the year Kylee Wolf to graduation and then in June the Herald lost their coach, Shawn Hunter, who accepted a similar position at El Modena in Orange.
“We always had a target on our back and with eight seniors graduated, it takes it out of the equation,” coach Todd Morrison said. “People will overlook us. We have outstanding girls who really really want to work hard and compete.”
Morrison has been the boys’ coach.
The Heralds move up one division, to 2AA.
Three seniors, outside hitter Jeanne Reinis, middle blocker Megan Kleber and opposite Kiana Louie take over the leadership mantle. Junior Delaney Harris moves into setter and junior Mandy Sides takes over at outside hitter.

7. La Canada
The perennial Rio Hondo League power was anything but last season.
The Spartans went 10-21 and finished tied for second in league. It was a very un-Spartan like year as the school’s 10-year league and 69 consecutive league match winning streaks ended.
But there is renewed hope. There was not a senior on the team last year and all but one player returned.
“With so many returning faces in the starting lineup we still needing to stay hungry and stay humble,” coach Brock Turner said. “They are now a year older and a year wiser. Wiser means experience.” Seven players played on La Canada’s inaugural beach volleyball team last spring. The Spartans will start the season without four-year starting libero Lauren Shin, who is still recovering from a torn ACL. Three-year varsity setter Leigh Sclafani returns. Megan Arnold and Haley Miller are in the middle, junior Megan Reilly and Sarah Sellman at opposite and Taylor Page and Jenna Gray on the outside.

8. La Serna
The Lancers won the Del Rio League and advanced to the 3AA quarterfinals.
“I don’t think we have expectations, other than to improve from last year,” coach Monique Gayton said.
Senior outside hitter Samantha Neely, the league player of the year returns.
“We’re very excited to have her back,” Gayton said. “She just goes into the gym and get things done. She gets the most out of her teammates.”
Junior Paige Tillman is back for her third year at setter. Senior Simon Oram is back at opposite and Junior Lauren Butler and senior Isabelle Von Lockner also return.

9. Monrovia
The Wildcats are going to an international style of play to try and make up for a lack of size.
“We do not really have an outside hitter or a real defense specialist,” coach Wayne Teng said. “We definitely have a middle blocker and definitely have a setter. Everyone else will play all positions.”
Senior Donna Rivas returns at setter. Senior Jenna Harper, who returned to Monrovia after playing at Maranatha last year, is in the middle.
Another bounce-back from Maranatha is sophomore Leila To’omalatai, who could change Teng’s international-style proclamation if her outside hitting becomes comparable to last year, when she led the Minutemen in kills, or her older sister (Noralia) and cousin (Tirah Le’au), who both at Monrovia and are playing collegiately.
Outside hitter Madison Mayoralgo, also a sophomore, is an integral part of the offense.

10. Los Altos
The Conquerors will know where they stand right off: They play at St. Lucy’s in a Sept. 9 opener.
“This year we’re a little bit of everything,” coach Jaime Ornelas said. “This year the girls are very eager to learn and that has me really excited. The kids are very coachable, and yes, fairly young.”
Junior Mireya Rojo gets to step out of her sister’s shadow, Ornelas said.
“She’s the leader of the pack,” he said. “The little Rojo is starting to come out.”
Senior libero Tanya Metchkoff returns to the starting lineup and 6-foot-1 junior middle blocker Chelyn Williams is nearly 100 percent after suffering from a torn ACL. Senior Haley Brownfield takes over at setter.