The 10th annual West San Gabriel Valley Public vs. Private softball game will be held June 11 at Live Oak Park in Temple City. The game features some of the area’s top seniors. Last year, the Public team won to take a 6-3 lead in the series. 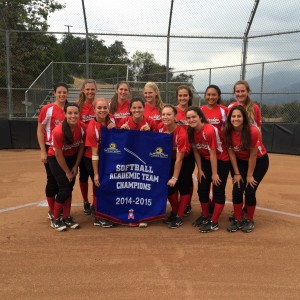 The Flintridge Sacred Heart softball team was presented as the 2014-15 CIF-Southern Section academic champion for schools with the enrollment of fewer than 1,499 students. The team was honored in a pre-game ceremony at Angel Stadium. The Tologs (9-7) have a grade-point average of 3.79.

Softball
Maranatha 3, Valley Christian 2 — Michelle Lieng was the winning pitcher, striking out four, and had a two-run homer to lead the Minutemen (11-5, 2-1) to the Olympic League win. For Maranatha, Kymber Yamamoto had an RBI.
Flintridge Prep 5, Rio Hondo Prep 3 — Natalie Dale had a double and Amari Dennis had a single and an RBI to lead the Rebels (7-6, 4-3) to the Prep League victory. Alicia Padilla went 2 for 3 with a double and an RBI for Rio Hondo Prep (8-6, 3-4).
Crescenta Valley 12, Arcadia 4 — Susan Harrison hit a homer and Isabelle Mejia had a double for the Apaches (9-3, 5-3) in a Pacific League loss.
Boys tennis
Maranatha 16, Whittier Christian 2 — The teams of Nathan Shin and Drew Sierra and Joel Wunderly and Ethan Chee swept in doubles to lead the Minutemen to clinch their third Olympic League title. Also contributing to Maranatha’s victory was Stephane Splichal who swept in singles.
Arcadia 13, Burroughs 5 — Nicholas Figueira swept in singles and the team of Brian Kim and Cibi Pari swept in doubles to lead the Apaches (15-0, 10-0) to the Pacific League win.
Boys volleyball
Flintridge Prep 3, Glendale 0 — Dante Fregoso had 19 kills and two aces and Tyler Dill had nine kills for the Rebels (14-2) in a 25-20, 26-24, 25-14 nonleague win. Also contributing to Flintridge Prep’s victory were Zack Picker and Riley Jones who both had 13 digs and Jake Althouse who had three blocks.
Temple City 3, Pasadena Poly 0 — Kris Shepherd had five kills and Alex Veitch had three blocks for the Panthers (5-10) in a 25-15, 25-14, 25-10 nonleague loss.

Softball
Pasadena Poly 11, Chadwick 4 — DeeDee Logan had a homer and Natalie Clark went 3 for 4 for the Panthers (8-2, 6-0) in a Prep League win. The Panthers had 15 hits.
Baseball
Arcadia 13, Muir 1 — Ryan Federico was the winning pitcher, striking out seven and Michael Luna, John Woo and Travis Sailor each had double for the Apaches (11-6-1, 5-2) in a Pacific League win.
Pasadena Poly 6, Chadwick 0 — Bing Banta threw 72 pitches, allowing three hits and Griffin Carter, Andres Martinez and Nathan Lee each had two hits for the Panthers (10-3, 6-0) in a Prep League victory.
Boys tennis
Pasadena Poly 10, Mark Keppel 8 — The team of Andrew Trojan and Tim Matthiesson swept in doubles and Jack Flemming swept in singles to lead the Panthers (10-0) to the nonleague victory. In singles play, Cody Wong won two for the Aztecs (10-4).
Maranatha 14, Village Christian 4 –> Stephane Splichal swept in singles and the team of Bryan Lin and Kelvin Ye swept in doubles for the Minutemen (11-3, 6-0) in an Olympic League win.
Boys volleyball
Flintridge Prep 3, Pasadena Poly 0 — Alex Veitch had seven kills and Matt Allison had two aces and nine digs for the Panthers (5-9,1-4) in a 25-16, 20-14, 25-19 Prep League loss.
Boys golf
Pasadena Poly 209, Buckley 211 — Manny Medrano shot a 40, Andrew Feldmeth shot a 41 and Christian Henderson shot a 42 to lead the Panthers (7-4, 5-0) to the Prep League Championship victory at Brookside No. 2 par 35.
La Salle 186, Arcadia 212 — Sean Kelly shot 1-under 36 for the Lancers (15-0) in a nonleague win at Santa Anita Golf Course. La Salle’s Ryan Konrad and Arcadia’s Andrew Baek each shot a 37. Jesse Toribio, Cosmo Konrad and Tyler Anastasia all shot a 38 for La Salle.
Flintridge Prep 220, Firebaugh 291 — Flintridge Prep had all of the top five finishers at Los Amigos Golf Course par 36 to defeat Firebaugh in a Prep League match. Justin Yu shot a 40, Cameron Wu had a 43, Matthew Choi had a 44, Kartik Tandon shot a 45 and Brendan Barton shot a 48 for Flintridge Prep (11-6, 2-4). 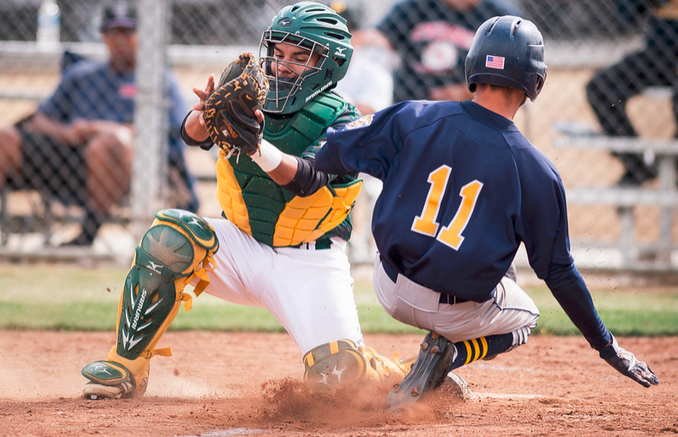 MONTEBELLO — This week has the feeling of an elimination bracket for the Alhambra and Schurr high school baseball teams, who each began the week one game behind Almont leader Montebello and couldn’t afford to take a step backward.
Alhambra, at least for now, doesn’t have that concern.
Nick Giambalvo had three RBIs and the Moors kept pace in the race for the league title with an 8-2 victory over the host Spartans.
James Giambalvo also had two hits and allowed just one earned run on the mound for Alhambra, which improved to 11-5 overall and 6-2 in league play. Michael Corona had three hits and a RBI for Schurr, which slipped to 13-6-1 and 5-3. The two teams meet again at Alhambra’s Moor Field on Thursday.

Alhambra’s Nick Giambalvo: “We’re just going to have to come at Schurr (again) on Thursday and then really come at Montebello (next week). Our bats are coming alive now and we’re starting to become one as a team. (This win) means a lot. We have a lot to accomplish. We are going to keep trying and do our job.”

Schurr’s Michael Corona: “We just said to ourselves, ‘Hey, come on, we’re a good team, we can stay in it. Just fight.’ We did. Some hits were right at people and we’re outs and some where hits, but we all had good at-bats.”